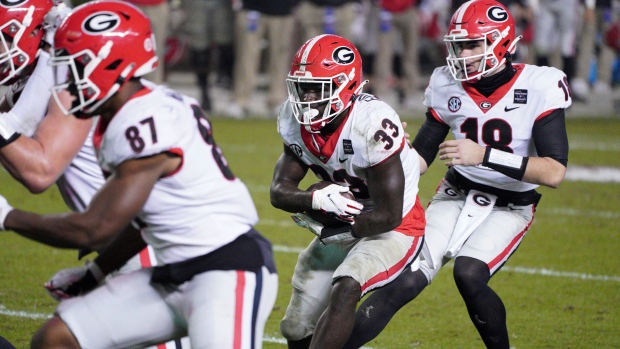 With championship week on the horizon, Week 15 is shaping up to be the calm before the storm.

As always, there are still plenty of entertaining games to check out.

In the lone matchup between ranked teams this weekend, No. 9 Georgia will travel to face No. 25 Missouri in an SEC showdown.

Georgia’s offence has been re-energized with the switch to J.T. Daniels at quarterback and it will be interesting to see how he fares against a ranked opponent on the road.

Also, the No. 15 USC Trojans look to finish off their condensed PAC 12 season undefeated as they travel across town to take on Chip Kelly and the UCLA Bruins.

With a win on Saturday, USC will clinch a berth in the PAC-12 championship next weekend. On the other hand, UCLA wants to play spoiler against their rival after surprising this season.

Here are my picks for Week 15 in the latest edition of Simmons vs. The Spread.

On the heels of three straight wins, Missouri is ranked for the first time this season. However, you have to consider the competition they have faced during their win streak as all three victories have come against weaker SEC opponents in Arkansas, South Carolina and Vanderbilt. Georgia’s offence has heated up since the switch to USC transfer J.T. Daniels at quarterback. Daniels has pushed the Bulldogs’ downfield passing game that they did not have with Stetson Bennett as the helm. It is puzzling why the Tigers took so long to get Daniels involved in the offence. The same could be said about James Cook, who showed flashes of the ability his older brother Dalvin possesses running the ball last week. Missouri will come back down to earth this week against better competition. Go Dawgs.

Last week, Rice was a 22-point underdog on the road and were shorthanded against Marshall but they still pulled off one of the most improbable wins of the year with a 20-0 victory. Marshall threw five interceptions in that game and gave them great field position over and over. I feel like this current spread is more reflective of the final result of the game than Rice’s actual ability as a team. UAB has not played since Oct. 31 due to various game cancellations and will want to finish the season strong. They competed tough against two ranked teams in Miami and Louisiana-Lafayette and have a stud at running back in Spencer Brown, who will be a handful for Rice on the ground. The Owls have allowed 141 rush yards per game this season. I think this spread has more to do with recency bias than it should and I like the Blazers in this spot.

Tennessee started the season 2-0, including a lopsided win over Missouri, and has not won a game since. This season has been a disappointment for the Volunteers overall after they entered the year with high expectations. On the other side, Vanderbilt has done exactly what was expected of them with zero wins after their preseason win total was set at 0.5. While the obvious focus for Vandy’s last game was on kicker Sarah Fuller, it also highlighted how bad their offence is as they were unable to get her in position to even attempt a field goal or an extra point. Tennessee’s offence has not scored over 20 points since its Oct. 10 loss to Georgia. Meanwhile, Vanderbilt has averaged a lowly 14.5 points per game. I don’t see the total for this game getting to 50.

USC needed a miracle comeback to pull off a win over Arizona State, and perhaps more alarmingly needed a last-minute drive to beat Arizona. However, they have put it together over the past two weeks with one-sided wins over both Utah and a solid Washington State team. Quarterback Kedon Slovis finally looked in rhythm last week with four touchdowns in the first quarter. He has an impressive array of weapons in Amon-Ra St. Brown, Tyler Vaughns and Drake London. London, in particular, has been an absolute matchup nightmare down the field, averaging 16 yards per catch. UCLA, on the other hand, has played above expectations in its third season under Chip Kelly with wins over ASU and Cal. However, the “Baby Bruins” are a young team and USC just has too much firepower on offence. I’ll take the Trojans to win and cover.

Oregon State has been better than anticipated as they secured an upset win over Oregon and played Utah tight last week despite being without star running back Jermar Jefferson. Jefferson, who has been cleared to return this week after he was placed in COVID-19 protocol, might be the best back in the conference with an average of 168 yards per game on the ground. He will easily be the most dynamic player on the field Saturday night as Stanford lacks a playmaker on offence. Stanford has had an unfortunate circumstance arise due to local COVID-19 protocols and have been unable to play home games. While they did pull off the upset win last week against Washington, their third straight road game will start to take a toll on the team this week as Corvallis is never an easy place to play. Let’s roll with the home dogs here.