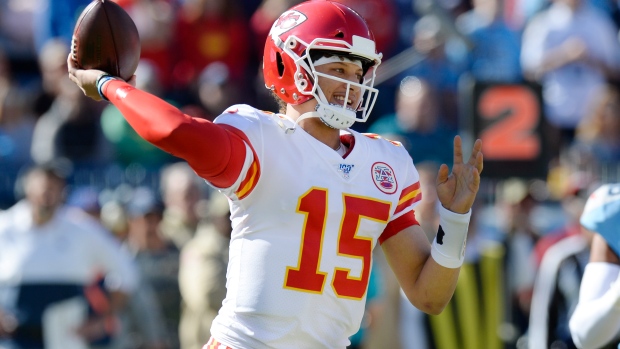 We're going out West for @Chiefs vs. @Raiders 🤩 pic.twitter.com/hkOZrwM6EL

This will mark the second meeting between these two clubs, after the Raiders upset the reigning champs 40-32 as a 10.5-point underdog in Week 5.

Las Vegas enters play riding a three-game winning streak, while Kansas City is fresh off a bye and will be out for revenge.

We'll let our play do the talking. pic.twitter.com/yb5wVqnVVR

That’s because the Raiders reportedly took a victory lap around Arrowhead Stadium following their Week 5 victory, something that did not sit well with the Chiefs.

The loss was Patrick Mahomes’ first in five career starts against the Raiders, a team he’s absolutely owned over the last three seasons.

Las Vegas ranks 21st on defence by DVOA, and their lack of pass rush should give Mahomes all day to pick them apart. Only three teams have a lower sack rate than the Raiders, and only two squads have generated fewer quarterback hits.

Las Vegas has also struggled versus enemy running backs, and while it’s impossible to predict which Chiefs running back will excel, both Clyde Edwards-Helaire and Le’Veon Bell are set-up for success.

The Raiders are allowing 4.58 yards per carry, while allowing 11 all-purpose touchdowns to running backs as well as the fourth-most receptions to the position.

Despite their defensive deficiencies, the Raiders have won three straight and are fresh off dismantling the Denver Broncos by 25 points.

Las Vegas rushed for 203 yards and four touchdowns against the Broncos, and would love to replicate that performance on Sunday night.

The Chiefs’ Achilles heel is their run defence, as was evident in the first meeting between these two rivals. The Raiders rushed for 144 yards and two scores that day, dominating the time of possession by nearly 11 minutes.

Derek Carr threw for a season-high 347 yards and three scores back in Week 5, earning his highest quarterback rating since Week 8 of the 2018 season.

Players this season with a TD-INT ratio of at least 8 and a passer rating over 100:

Carr is quietly having a very strong season, throwing for 2,156 yards and boasting a 16-2 TD-to-INT rate.

Death, taxes, and Andy Reid-led teams winning games following a bye. In 22 seasons, Reid’s teams have lost just three times after a week’s rest, and the Chiefs have never been defeated with Mahomes under center in that situation.

This is the third consecutive year we face the Raiders following our bye week. We all know how good Big Red is after a bye... pic.twitter.com/C9Qj5oF5go

Sunday’s game will actually mark the third consecutive season that Kansas City has faced the Raiders following a bye, and the results in the previous two have been extremely one-sided.

Mahomes has thrown nine touchdown passes in his last two games, yet oddsmakers are betting against him tossing three scores in this contest.

Not only does Las Vegas struggle to rush the passer, they rank 22nd in coverage grade by PFF.

For his career, Mahomes has a higher TD rate on the road than at home, and given that this game will be played in a dome, with no weather concerns, I like him to put up at least three scores through the air.