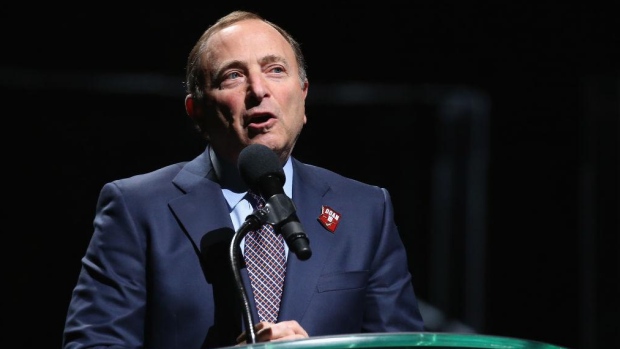 “Our message is unequivocal: We will not tolerate abusive behaviour of any kind,” Bettman said. “The world is changing for the better. This is an opportunity, and a moment, for positive change and this evolution should be expedited – for the benefit of everyone associated with the game we love.”

Bettman relayed the NHL’s four-point plan of action following his meeting here with the league’s executive committee and Board of Governors.

Bettman’s words represented a positive step forward for the NHL, but now comes the more difficult and critical part: the follow through.

That’s what Aliu said in his response to Bettman’s plan.

“I am encouraged the commissioner embraced many of the changes we proposed at the meeting,” Aliu wrote on Twitter. “Now the hard work begins of focusing on specifics and implementing policy that will make this sport more diverse, safer, and accountable.

“We have to ensure that future generations of hockey players do not face the barriers and racism that I have throughout my career. Together we can do something truly great and transformative for hockey.”

Bettman called the Flames’ response to the Bill Peters situation “timely, professional and appropriate.” The investigation remains ongoing into Chicago Blackhawks assistant coach Marc Crawford, which Bettman said will remain in the hands of the Blackhawks’ organization.

Bettman also said he needed to “sort out” the “confusion” that surfaced in conflicting statements from Ron Francis and Carolina minority owner Peter Karmanos about who knew what and when regarding Peters’ tenure with the Hurricanes.

So while there is some clarity on where the NHL is heading with this four-point plan, there was very little clarity on incidents that happened in the past, where the line on inappropriate conduct should be drawn, and how far back falls within the statute of limitations. It is seemingly within the “grey area” that Bettman mentioned.

The NHL also stopped short of instituting a formal policy or code of conduct, remaining the only major North American professional sport without one. (The NFL, NBA and MLB conduct policies are all clearly defined.)

“There are lines that cannot be crossed – clearly physical abuse and racial and homophobic language cross the line,” Bettman said. “And while we acknowledge that there may be other actions that could cross the line or fall in a grey area, we hope the program we create, and its attendant consciousness-raising will help better define what is and what is not acceptable conduct and will make for a better playing and coaching environment.”

Bettman said the NHL will consult with the Players’ Association and the Coaches’ Association in the creation of these programs. Since the mandatory annual training will only be required for head coaches, assistant coaches, minor league coaches, GMs and assistant GMs, the NHL will determine with the NHLPA whether another customized program should be presented to the players.

The NHLPA confirmed they have been in contact with the NHL and “look forward to discussing these important matters with the league.”

“We will focus the programming on training and initiatives to ensure respectful locker rooms, training facilities, games and all other hockey-related activities,” Bettman said, “and teach to ensure bystander intervention techniques, anti-harassment, anti-hazing, non-retaliation and anti-bullying best practices.”

To aid in that, Bettman said NHL executive vice-president for social impact Kim Davis will form a “multidisciplinary council” to suggest initiatives, monitor progress and coordinate efforts with all levels of hockey.

It’s probably also safe to say that fearless former players like Aliu and others that had the courage to hold coaches and executives to account will continue to hold the NHL’s feet to the fire as the real work now begins.