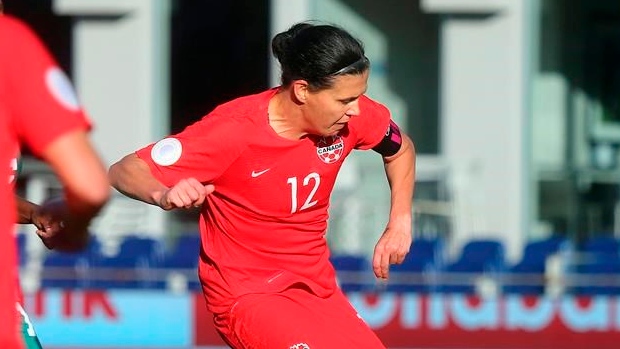 CARDIFF, United Kingdom — Captain Christine Sinclair, playing her first game for Canada in more than a year, was injured in the first half of a friendly against Wales on Friday.

UPDATE: Canada head coach Bev Priestman told the media after the game that the injury to Sinclair doesn't look serious and it "seems positive." Sinclair was walking around and will be re-assessed on Saturday. She hasn't been ruled out for Tuesday's friendly against England.

Priestman said it seems positive for Sinclair, not majorly concerned, and fingers crossed she’ll be fine for England. #CanWNT

Sinclair was clearly in pain as she lay on the ground but hobbled off the field under her own power, holding one of her boots, in the 32nd minute. She received more treatment on the sidelines.

Sinclair was replaced by striker Evelyne Viens in the 33rd minute with Canada leading 1-0.

Sinclair had not played for Canada since a tournament in France in March 2020.

The 37-year-old from Burnaby, B.C., missed the SheBelieves Cup in February due to injury.

Sinclair earned her 297th cap Friday. She is the world's all-time leading goal-scorer with 186.