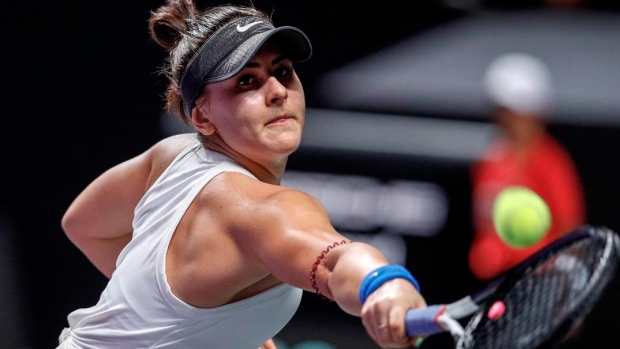 After a long wait, Canadian tennis star Bianca Andreescu is finally set to make her return to competitive play.

The 2019 U.S. Open champion will return to the court at the upcoming Melbourne Summer Series.

A pair of WTA Tour 500 events — the Gippsland Trophy and Yarra Valley Classic — will run Jan. 31-Feb. 6 as part of the series, with players being divided into the two events.

It will mark Andreescu's first competitive appearance in about 15 months.

The tournaments will serve as tune-ups for the Australian Open, the season's first Grand Slam, which starts Feb. 8.

Andreescu hasn't played since a left knee injury forced her to retire from a match at the WTA Finals in October 2019.

The WTA Tour released the entry list for the series last week and a spokesperson at the Octagon agency, which represents Andreescu, confirmed her participation Monday in an email. Andreescu's coach, Sylvain Bruneau, said in a text message that they planned to leave for Australia on Thursday.

Andreescu enjoyed a meteoric rise in 2019 after starting the season ranked No. 152 in the world. She closed the year at No. 5 despite missing some time throughout the season due to injuries.

The 20-year-old from Mississauga, Ont., earned titles at Indian Wells, Calif., and Toronto that year before winning her first Grand Slam in New York.

In 2020, she was on Canada's Fed Cup roster for a February tie in Switzerland but didn't play due to her knee injury. When WTA Tour events resumed in the summer after a pause due to the COVID-19 pandemic, Andreescu declined to participate.

She announced in September that she would take the rest of the season off to focus on health and training. Two months later, she confirmed her return for the 2021 Australian swing.

"The positive thing is that she is obviously extremely motivated," Bruneau told The Canadian Press at the time. "She's always motivated, so it's not a change. But when you're forced (off the court) and that's your life, you want that back badly."

The Australian Open will run through Feb. 21. All players must quarantine for 14 days in Melbourne after arriving Down Under.

A WTA 250 event will also be played in Melbourne during the second week of the Australian Open.

Andreescu has shown in the past that she can quickly get back to a high level of play after a break.

She played just one match in a four-month span leading up to the Rogers Cup in 2019. Andreescu was pushed from the start that year in Toronto, needing three sets in each of her first four victories.

"She'll have to get into battle mode right from the start but that's also her (modus operandi)," said tennis broadcaster and former national team coach Robert Bettauer. "I think she'll be very clear-headed about what to expect. She's not the only one who has taken an extended break."

Top-ranked Ash Barty, for example, hasn't played a WTA Tour match since February. The pandemic upended the calendar to varying degrees for everyone.

"That does help Bianca," said Bettauer, the CEO of the Pacific Institute for Sport Excellence. "She's coming back to a very unusual tour where many players are not far removed from her situation of just not having played many competitive matches."

Barty has a comfortable lead on Simona Halep in the world rankings. Naomi Osaka is third with Sofia Kenin, Elina Svitolina and Karolina Pliskova all close behind.

"It's a very competitive field at the top, they're all pretty even," Bettauer said. "So I think Bianca is absolutely one of them that will have the opportunity to challenge for the top spot and win more majors. So that hasn't changed. And it's not like while she was gone, one player clearly established herself as the undisputed No. 1.

"The dynamic at the top of the women's game seems similar to what it was when she was injured, it's just maybe there's more contenders there now."

Bertens has opted out of the Aussie swing due to injury. The rest of the collective field at the Melbourne series will feature 49 of the WTA Tour's top 50 players.