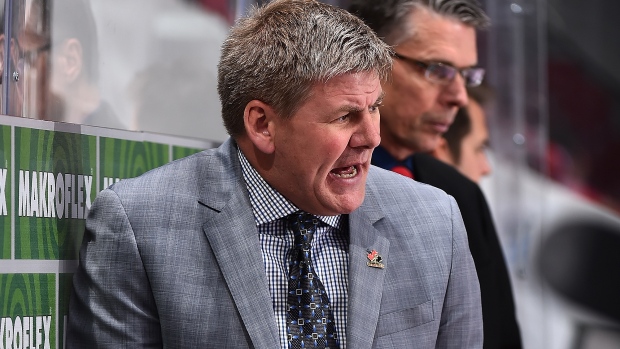 Calgary Flames coach Bill Peters apologized on Wednesday night for the racially charged comments from 2009 that have thrown his job status into jeopardy.

Peters acted on his own to send the statement independently from the Flames’ organization in the form of an open letter to GM Brad Treliving. Peters sent the statement from Calgary, where he returned ahead of the team after being informed he would not be behind the Flames’ bench on Wednesday night in Buffalo.

The Flames replaced Peters with assistant coach Geoff Ward in the wake of revelations that he repeatedly used racial slurs around Nigerian-born player Akim Aliu a decade ago while coaching in the American Hockey League.

Aliu politely declined to comment on Peters’ statement when contacted by TSN.

In his statement, Peters also did not acknowledge or address the subsequent physical altercations that came to light following Aliu’s explosive account of the 2009 incident.

Peters did not immediately respond to a request for comment from TSN whether he planned to publicly address the physical altercations that were alleged to happen while coaching the Carolina Hurricanes and were confirmed by current Hurricanes coach Rod Brind’Amour on Wednesday.

Below is Peters’ statement in its entirety:

Brad: Please accept this as a sincere apology to you, and the entire Calgary Flames organization, for offensive language I used in a professional setting a decade ago. I know that my comments have been the source of both anger and disappointment, and I understand why. Although it was an isolated and immediately regrettable incident, I take responsibility for what I said.

The statement was made in a moment of frustration and does not reflect my personal values. After the incident, I was rightfully challenged about my use of language, and I immediately returned to the dressing room to apologize to the team.

[Editors note: Aliu said on Tuesday that Peters did not apologize following the incident.]

I have regretted the incident since it happened, and I now also apologize to anyone negatively affected by my words.

I am aware that there is no excuse for language that is offensive. I meant no disrespect in what I said, and it was not directed at anyone in particular. But, that doesn’t matter; it was hurtful and demeaning. I am truly sorry.

I accept the reality of my actions. I do believe that we must strive to act with integrity, and to take accountability for what we say and do. This letter is intended to do exactly that; I hope it is accepted as intended.

I appreciate the thorough review of this situation being undertaken by the Flames. It’s the right thing to do, and I support it fully.