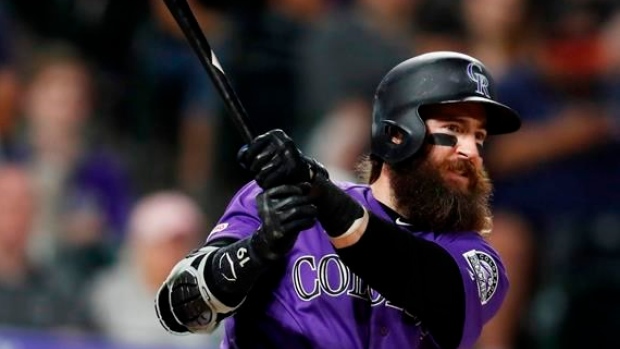 DENVER — Jon Gray survived a rough first inning for another dominant outing against San Diego while Charlie Blackmon carried Colorado's offence to another win at home.

Blackmon homered twice to back a 10-strikeout start from Gray, and the Rockies beat the Padres 9-6 on Thursday night despite two homers from Manny Machado.

Blackmon added a two-run triple and finished with four hits and four RBIs to continue his hot start to June. Trevor Story also homered for the Rockies, who have won 11 of 12 at Coors Field.

Blackmon returned Saturday from a calf injury that sidelined him for two weeks and immediately started hitting. He is batting .440 in six games with four home runs and 10 RBIs.

"Seeing how well he is in the zone right now, he's in his own place," Gray said. "It's scary for other pitchers and good for us."

Gray has been a scary matchup for the Padres and is now 10-3 with 135 strikeouts in 18 career starts against San Diego. The strikeouts are the most against the Padres in Colorado franchise history.

San Diego left-hander Matt Strahm (2-6) allowed six runs and seven hits over 3 1/3 innings and added two hits in his return from the 10-day injured list. All four leadoff hitters got on against him.

"He got snakebitten by the leadoff batters getting on," Padres manager Andy Green said. "It's tough pitching in this ballpark, and it's tough when the leadoff guy gets on five of your first six innings."

Gray (6-5) got off to a rough start before settling down. San Diego scored twice in the first inning on a double by Eric Hosmer and a single by Machado. Colorado answered with three runs in the bottom of the inning, with Ian Desmond's two-run double giving the Rockies a 3-2 lead.

Five of the first six batters Gray faced got hits, but he allowed just four hits over the last 5 2/3 innings.

Story extended the lead with a two-run homer in the second, his 16th.

Blackmon took over with home runs to centre field leading off the fourth and sixth innings, then hit his triple off Matt Wisler in the seventh to give the Rockies a four-run lead.

Both of Blackmon's two-homer games this season have come against the Padres. He has 14 homers.

"I don't hit a ton of homers to centre, but I barrelled that one up pretty good but I hit it pretty high," Blackmon said of his first home run.

Machado cut the deficit to 6-4 with a homer in the fifth and added another solo shot in the ninth, his 12th of the season. Five of Machado's eight hits in June have come in the last four games.

"It's just a matter of time before he goes off," Green said. "We expect him to carry us at some point this year, and we're starting to see the signs of that."

Padres: RHP Robert Stock was optioned to Triple-A El Paso to make room on the roster for Strahm. ... OF Franchy Cordero (right elbow strain) left Wednesday's rehab assignment with a left leg injury. "Still waiting on a full rundown of where he is today," Green said. "He tweaked the quad yesterday, wait and see how he responds to that. You don't typically know about those things until you get a couple of days faster."

SHOUT OUT TO THE NORTH

The Padres will send RHP Cal Quantrill (1-2, 4.85) against Colorado RHP Jeff Hoffman (1-3, 8.06) on Friday night. Quantrill, a rookie, is making his sixth career start and first against an NL West opponent. Hoffman is 1-1 with a 0.77 in four career games — two starts — against San Diego.