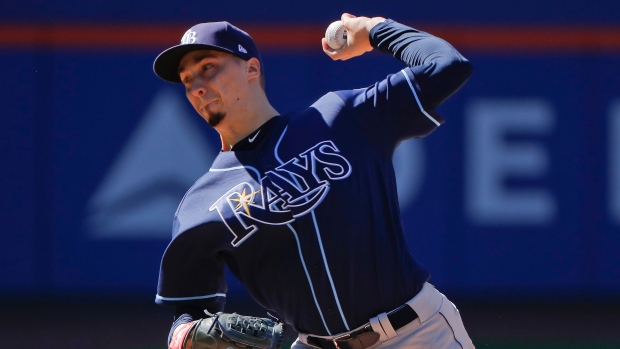 Optimism has been building over the past several days and weeks that an MLB season could begin at some point this summer with multiple reports indicating an early-July return to play as the best case scenario.

But before that happens, MLB and the Major League Baseball Players Union will have to agree to a set of parameters to make a shortened season work within the collective bargaining agreement. One of the major issues on the table? Player pay.

Tampa Bay Rays ace Blake Snell says he will not play this season for a reduced salary, saying the risk is "just not worth it."

"Y'all gotta understand, man, for me to go -- for me to take a pay cut is not happening, because the risk is through the roof," Snell said on his Twitch channel. "It's a shorter season, less pay."

The two sides agreed to a prorated pay structure in March that would see players paid a percentage of their full salaries based on games played. But that was before it became known games in the near future would likely take place without fans, cutting off one of MLB's biggest revenue streams. On Monday, owners approved a proposal that splits revenue 50/50 between teams and players and it's expected they will present this offer to the players at some point this week according to ESPN's Jeff Passan.

"No, I've got to get my money. I'm not playing unless I get mine, okay? And that's just the way it is for me. Like, I'm sorry you guys think differently, but the risk is way the hell higher and the amount of money I'm making is way lower. Why would I think about doing that?" Snell said.

The 27-year-old left-hander is entering the second season of a five-year, $50 million deal that would have paid him $7 million in a full season. If the league follows through with a season in the neighbourhood of 80 games like is being discussed according to multiple reports, Snell would receive about $3.5 million.

"I mean honestly it's just scary to risk my life to get COVID-19 as well as not knowing and spreading it to the others,'' Snell texted to the Tampa Bay Times following his Twitch video. "I just want everyone to be healthy and get back to our normal lives cause I know I miss mine!"

MLBPA head Tony Clark reportedly believes a revenue sharing plan would essentially constitute a salary cap and therefore is a non-starter for the union. Proposals like this have been quickly shot down by the MLBPA in the past.

According to The Athletic's Ken Rosenthal and Evan Drellich, league officials say the one-time revenue sharing agreement should not constitute a salary cap because it includes no minimum or maximum salary and evenly assesses both risk and reward between both sides. The league also reportedly says it will lose too much money playing games without fans in attendance but the players association does not share that belief.

Opening Day was originally supposed to take place on March 26 before MLB pushed back the start of its season indefinitely because of the coronavirus pandemic.