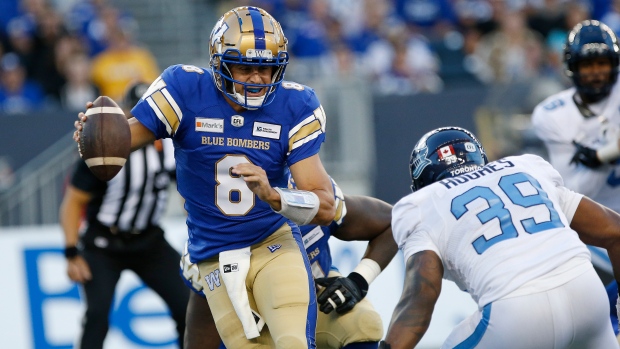 TORONTO — After punching their playoff ticket last week, the Winnipeg Blue Bombers can solidify a shorter route to the 2021 Grey Cup.

The Bombers (9-1) can cement top spot in the West Division on Saturday with a home victory over the B.C. Lions (4-5). Winnipeg, the defending Grey Cup champion, became the first team to clinch a playoff berth Friday night with a 26-16 victory over the Edmonton Elks.

A first-place finish would secure Winnipeg the right to host the West Division final Dec. 5 versus the winner of the conference semifinal Nov. 28. But the Bombers could still clinch a home playoff game even with a loss.

If B.C. wins and the Saskatchewan Roughriders (5-4) lose to the Calgary Stampeders (5-5), the Blue Bombers would clinch at least the right to host the West Division semifinal. The same would also apply if B.C. defeated Winnipeg by less than 21 points and Saskatchewan beat Calgary.

The Grey Cup game will be held Dec. 12 at Tim Hortons Field.

The Bombers certainly don't face an easy path to first in the West Division. Their four remaining regular-season games — which includes two against the Montreal Alouettes (5-4) — are versus teams with combined 19-18 record (. 514).

By comparison, Saskatchewan's five remaining games — which includes two versus Edmonton (2-7) — are against teams with a combined 18-28 record (. 393).

And that will include two meetings with Winnipeg.

Toronto visits Montreal on Friday night while Hamilton hosts Ottawa on Saturday afternoon. In West Division action, B.C. is in Winnipeg while Saskatchewan visits Calgary, both on Saturday.

Note to readers: This is a corrected version of an earlier story. The Grey Cup will be held on Dec. 12, not Dec. 5 as previously stated.