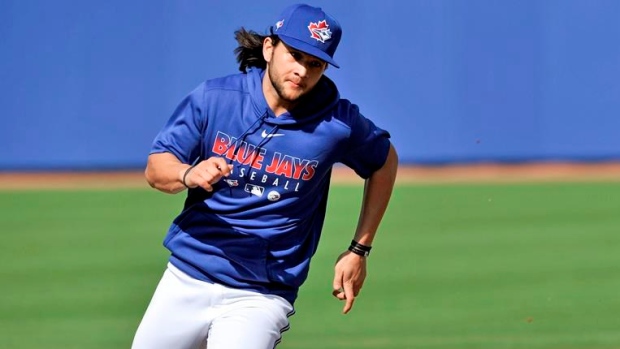 Summer training camp kicked off quietly for the Toronto Blue Jays on Monday as most of the team returned to Rogers Centre to resume preparations for a shortened regular season while several players remained in Florida after another reported positive COVID-19 case.

Players were scheduled to participate in private workouts after arriving in the city a day earlier via team charter. The stadium was closed to media and the club did not schedule availabilities with players or management.

The Blue Jays would not confirm the latest positive COVID-19 case, first reported by ESPN's Jeff Passan, who said those in contact with the player did not board the flight to Toronto. Multiple media outlets also reported the news, with USA Today's Bob Nightengale saying 12 players remained in Dunedin, Fla., home of the club's spring training facility.

The latest developments came two weeks after multiple Blue Jays players and staff members tested positive for COVID-19. The team had to shut down its Dunedin complex and personnel at the facility underwent testing per protocols established by Toronto's medical team and Major League Baseball.

Players need to be cleared with two negative COVID-19 tests to join training camp. A team spokesman would not confirm how many players were in town, but said a second charter flight was expected to arrive later this week.

Canada's lone MLB team received special permission from federal government and health authorities last week to train at Rogers Centre. Players and team staff will isolate from the general public in a closed environment at the stadium and hotel attached to the venue.

Blue Jays president Mark Shapiro recently said that he would "expect a large number of positive tests" as more COVID-19 testing was completed as players and staffers reported to camp.

"That's going to be part of the transition process into creating the closed environment as much as possible around our players," he said on a June 26 conference call.

There has been a significant uptick in novel coronavirus cases throughout parts of the United States in recent weeks, including eyebrow-raising numbers coming out of Florida.

After a three-game series with the Rays and a two-game series in Washington, the Nationals also will provide the opposition for the Blue Jays in Toronto's home opener on July 29.

The Blue Jays finish the season with seven in a row at home, capped by a Sept. 27 date against the Baltimore Orioles.

Most clubs are expected to play in their home stadiums this season, but Toronto faces an additional hurdle because of border and quarantine rules during the pandemic. The team has said it hopes to play home games at Rogers Centre, but that has not been finalized.

It wasn't immediately clear how many Blue Jays trained at the stadium on Monday. Pitcher Nate Pearson posted a photo on Instagram of the empty ballpark — with retractable roof open — complete with the tagline "We made it!"

The team is expected to hold a conference call with manager Charlie Montoyo on Tuesday afternoon. Media access to the stadium will likely begin Wednesday.

Toronto was 12-6 in pre-season play this year before spring training was stopped in mid-March amid the widening coronavirus outbreak. The Blue Jays finished the 2019 season with a 67-95 record.

This report by The Canadian Press was first published July 6, 2020.

-With files from The Associated Press