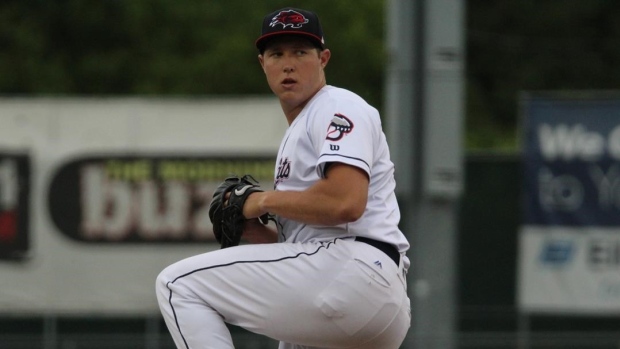 DUNEDIN, Fla. — On the day Toronto Blue Jays pitchers and catchers were officially due to report to renovated TD Ballpark, Nate Pearson quietly sat at his locker, looking ready for business.

But before the 23-year-old with the 104-mph fastball begins the process of doing what he can this spring to convince Jays decision-makers to make him a part of the opening day roster — the odds at this point are extremely low but injuries have a way of changing things in an instant — Pearson and the club will have to figure out how his workload will be managed.

The plan should start to come into focus shortly as Pearson and the Jays have been going over the options, with 130 to 140 innings the likely range for the big right-hander in 2020.

“We talked about it a little bit but I don’t think they’ve come down to a final decision,” Pearson said Wednesday. “Obviously, I have some say in it, so I think we’re going to talk about it throughout spring training and really get a number or an idea in mind of what we’re going to try to accomplish this year.

Innings limit or no innings limit, Pearson is saying the exact same things uttered by Bo Bichette and Cavan Biggio last year as first-timers — and players fully expected to start the year in the minors — on the big-league side of camp.

“My goal is to make the team out of camp,” said Pearson, fully knowing the reality is that he likely starts back in Triple-A, with a June or July ETA the best guess at this point. “Whether or not they decide to let me break with the team or not is not up to me. What I control is how my outings go and how well I perform and that’s really where my focus is.

“I’m pretty confident in my abilities and whether they think I’m ready or not is up to them. I know I can get some outs in the big leagues right now, whether it’s in the ’pen or as a starter, but it’s whatever they want to do. They call the shots and I’m going to respect whatever decision they decide to go with.”

Last year, the Blue Jays were creative with Pearson’s workload after he lost almost all of the 2018 season when he suffered a fractured forearm on a comebacker.

After the all-star break, the reins were taken off and Pearson went deeper into ballgames and hit career-high pitch counts, all while holding his filthy stuff despite the increased workload.

A tweaked version of that plan is once again an option, which would allow Pearson to throw the majority of his innings in the majors down the stretch.

“They mentioned it,” Pearson said. “I think we may try to do something a little bit different, just so I get more innings early on in the year. I think we’re going to decide here in a few days what we’re going to do.”

There’s also talk of a mid-season gear down.

“I think if they just let me go and do five innings each start out of the gate and let me get as many innings as I can at the beginning, then we can go through like a de-load phase maybe and that’s when I go to just maybe two innings a start or one inning per start,” Pearson explained.

The last time an innings limit and potential shutdown was a story in Toronto, it revolved around Aaron Sanchez back in 2016.

That name has been invoked when it comes to Pearson’s situation.

“I know they did this a lot with Sanchez when he was coming up,” Pearson said. “That’s what they keep saying to me, comparing me to him and how his route was to the big leagues. I’m pretty honoured to be in the same conversation with him, but it’s kind of making my own path to the big leagues right now.”

Despite the major-league stuff and the bright future, Pearson is still a kid in his first big-league camp.

He’s taking it all in and rubbing shoulders with big leaguers.

The funny part about that is the veterans talk just as much and maybe even more about him and his high-octane fastball.

“It’s pretty cool to be here, being a couple lockers down from Ken Giles and Danny Jansen right there and all these big leaguers that are around me,” Pearson beamed. “It’s pretty overwhelming at times, but kind of just take a breath and realize where I’m at and it’s just a true blessing to be here.”

If Pearson’s name comes up in a conversation, so does the velocity.

As of today, Pearson’s top out still sits at 104.1 mph, a pitch he threw to 2019 National League rookie of the year Pete Alonso at the 2018 Fall Stars Game in the Arizona Fall League.

“That’s the highest I’ve hit, but I’m feeling great right now and I’m excited to face some hitters in games and see what kind of stuff I bring to the table,” Pearson said. “The guys here kind of mess with me because in my sides I’ll let a couple go and I’ll hit a high velo pretty easily and they’ll start messing with me. I get my velo back pretty easily when I start throwing (in the spring), it’s kind of the location that comes at the end where I kind of hone in that velocity and get my command back. That’s the point I’m at right now, getting ready for games.”

The fastest pitch thrown by a big-leaguer in the Statcast era was the 105.1 mph heat clocked off the left arm of Aroldis Chapman in 2016, a number equalled by St. Louis Cardinals reliever Jordan Hicks in 2018.

Even though both of those pitchers are relievers who can air things out in one-inning stints, it will be a number to keep a close eye on when Pearson does finally make his debut.

Pearson cracks a smile when talking about his God-given ability to leave a vapour trail on a baseball.

Wanting to get the obvious questions out of the way and minimize the distraction, Blue Jays bench coach Dave Hudgens addressed the Houston Astros’ sign-stealing scandal Wednesday, saying he wishes he had done something about it.

“The biggest thing, I think, is I regret, and I’m sorry that we, that I, didn’t do something more to stop that when it was actually happening,” Hudgens said. “I think something could have been done but we didn’t and now we’re dealing with this.”

The 63-year-old, of course, was the Astros’ hitting coach from 2015 through 2018, and was interviewed by MLB officials during the investigation.

Investigators called it a player-driven scheme, and Hudgens doubled-down on that assessment Wednesday morning in Dunedin.

“I can remember sitting in the dugout and hearing a bang,” Hudgens said when asked when he found out about the trash can scheme. “Then I heard it a few times and I asked one of the players, ‘What’s going on? What’s banging?’ They said, ‘We’re letting them know when a breaking ball is coming.’ Hmmm, OK, and it just went from there. I can’t remember exactly when it was during the (2017) season, but it was sometime during the regular season.”

Hudgens didn’t exactly shoot down the notion that the 2017 World Series title is tainted, but added his belief is that it didn’t happen in the postseason.

Some of the evidence points to the contrary.

“It’s a good question, but to the best of my knowledge it wasn’t done in the playoffs,” Hudgens said. “There’s 30,000 people there and it’s hard to hear. I never heard it during the playoffs. Some people are saying that it was and if we did that’s a fair question to ask.”

Hudgens said he has felt support from the Jays front office during the process.

GM Ross Atkins addressed the subject of sign-stealing via electronics when the news first broke in November.

“I think it's really hard to say on just how prevalent it is, but it's not something the Toronto Blue Jays are spending any time on doing, so I don't think it's throughout the game and rampant,” Atkins said.

The story, however, is far from over and the Boston Red Sox are going to be the next franchise being sanctioned for electronic sign stealing before opening day.

BIGGIO NOW ONE OF THE VETS

A year ago, Cavan Biggio had a locker in the big-league clubhouse in Dunedin for the first time, sitting alongside veterans like Kendrys Morales, Kevin Pillar, Marcus Stroman and Justin Smoak.

Now, the 24-year-old is one of the most recognizable faces.

“It was my first big-league camp, I wasn’t on the roster or anything, so last year was just exciting to be around the big-league club, be around the coaches and other players,” Biggio said Wednesday. “Just getting into those spring training games — most of them were on the back end of things — but I think it was just a good experience to get work with the other guys and the coaches.”

The first full team workout isn’t scheduled until Monday, but Biggio, Vladimir Guerrero Jr., Bo Bichette and just about every other key member of the Blue Jays’ young core was spotted at the stadium on Wednesday.

That group is looking to continue the momentum they started over the final two months of 2019 when they put together a 24-28 record down the stretch.

“It was just nice to get your feet wet, go through ups and downs and then finishing strong as a team,” Biggio said. “There was a lot of excitement last year after the all-star break and trade deadline so I think just carrying on that excitement and momentum into spring training and then ultimately this season is what we’re trying to do.”