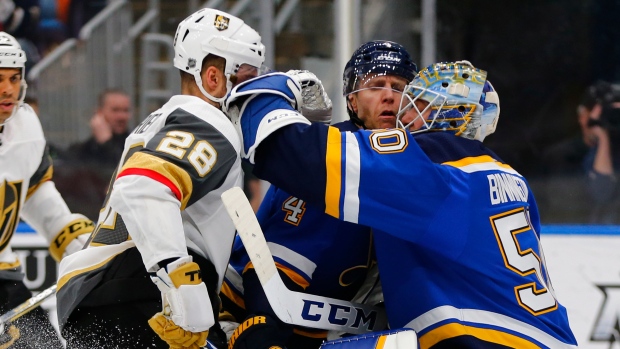 ST. LOUIS — The St. Louis Blues paid a big price to obtain Ryan O'Reilly and it's already looking like a bargain.

Buffalo never made the playoffs in O'Reilly's three seasons there. He reached the playoffs twice with Colorado, the last time during the 2013-14 season. Now he's on the cusp of getting back into post-season play with the Blues.

"It's awesome. It's one of the best things in hockey when you're playing in meaningful games and preparing for the playoffs," O'Reilly said. "It's what you train for in the summer — to go the distance. It's nice to be in this position. It feels good but there's a lot of work left to do."

St. Louis, which has six games to play, sits third in the Central Division and is closing in on a playoff spot. The Blues remained two points behind second-place Nashville, which beat Minnesota 1-0.

Jordan Binnington made 24 saves for his 21st victory of the season. He is one win short of matching Jake Allen's record set in 2014-15 for the most by a Blues rookie goaltender.

William Karlsson scored for Vegas, which could have clinched a playoff berth with a win. The Golden Knights are in third place in the Pacific Division, 11 points ahead of Arizona.

The Blues completed a sweep of their four-game homestand, outscoring the opposition 19-8. They won all three meetings with the Golden Knights this season and outscored them 12-5 overall. St. Louis is 4-0-2 all-time against Vegas, which reached the Stanley Cup Final as an expansion team last year.

Las Vegas goalie Malcolm Subban, making his fifth straight start, threw the puck behind the net but Sanford was there to control it. He skated out and fed Barbashev in the bottom of the right circle. Barbashev threaded his wrist shot between Subban's arm and body with 1:19 left in the period.

"I was a little surprised there," Barbashev said. "I was trying to shoot the short side and how it got in between his arm and his body, I don't know."

Barbashev has four goals and five points in his last three games.

Subban wished he had the play back.

"I probably should have covered it if I didn't have a play, but I just kind of threw it blindly behind," he said. "It's tough especially to give up the first goal that I gave up. It's tough in a game like that."

Alex Tuch got free on a breakaway at 8:20 of the second but Binnington made a solid save.

Jay Bouwmeester was called for slashing at 13:14 and the Golden Knights capitalized. Karlsson scored with 2 seconds left on the power play when he put in a rebound of Colin Miller's shot at 15:12.

"I think they played really well," Karlsson said about the Blues. "They were right on top of us and made it hard for us."

St. Louis regained the lead on O'Reilly's 27th goal when he snapped in a wrist shot from the left circle at 18:14 after taking a pass from Bouwmeester.

O'Reilly had gone eight games without a goal. His career-best total of 28 came in 2013-14 with Colorado.

"I haven't been shooting the puck very well lately," O'Reilly said. "Bouwmeester made a great pass to set me up there. The goal came at a good time. It gave us a little spark."

Bouwmeester gave O'Reilly all the credit.

"I saw him going. It was good play by him to pick it up," Bouwmeester said. "It was a pretty hard pass. He's a good guy to get going on a breakaway."

Sanford made it 3-1 at 6:27 of the third. Robert Bortuzzo fired a shot and Subban blocked it. The loose puck was airborne and hit Sanford in the neck as he was on his knees and it went in for a goal. Alex Pietrangelo also got an assist — the 300th of his career.

After a timeout with 1:13 to play, Subban was pulled for an extra skater. He finished with 19 saves.

"I thought it was a good game, a good hockey game by both teams," Vegas coach Gerard Gallant said. "Obviously they got the three goals and beat us tonight, but I thought we played well. We made a couple mistakes that ended in the back of our net, but there wasn't a lot of room out there. It was a playoff-atmosphere type of game and they played really well."

NOTES: Golden Knights G Marc-Andre Fleury and LW Max Pacioretty remain day-to-day with lower-body injuries. ... Vegas D Shea Theodore and C Pierre-Edouard Bellemare were late scratches. ... Blues D Carl Gunnarsson returned to the lineup after being out with an upper-body injury since Feb. 5. He missed 24 games. ... Ex-Blues player Paul Stastny was back on the ice in St. Louis for the first time since leaving. ... Blues RW Vladimir Tarasenko needs one goal for his fifth straight 30-goal season. ... The Blues improved to 11-2-0 in their last 13 home games after a 10-13-2 start.

Golden Knights: At the Colorado Avalanche on Wednesday night.

Blues: At the New York Rangers on Friday night.