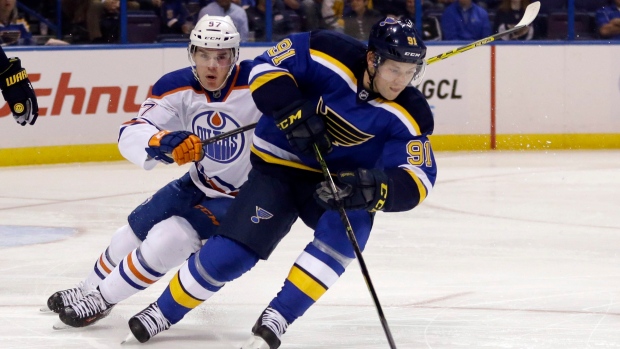 ST. LOUIS - With the difficulty level turned up to expert against the St. Louis Blues, Connor McDavid's first impression in the NHL was as a player with jaw-dropping skill but some things to work on.

McDavid faced a major test against the big and physical Blues but showed flashes of brilliance in the Edmonton Oilers' season-opening 3-1 loss Thursday night at Scottrade Center. The first overall pick got two shots on goal, stood out in the offensive zone and struggled in the face-off circle in his debut.

"I did some good stuff, did some bad stuff," McDavid said. "I had a couple chances that I need to score on."

Skating 22 shifts for 18:07 of ice time while centring Taylor Hall and Anton Slepyshev, McDavid improved as the game went on. Coach Todd McLellan thought the 18-year-old's best period was the third, when he created two good scoring chances.

McDavid was on the ice for Ryan Nugent-Hopkins' first-period power-play goal that counted when Alex Pietrangelo banked the puck into his own net. He earned a minus by being on the ice in the final minute for Troy Brouwer's empty-netter as the Oilers were trying to the score.

At times, McDavid showed a bit of why he's considered the league's next superstar. In the third period, he blew by Canadian Olympian Jay Bouwmeester down the right wing to get his first shot on net, which Brian Elliott turned aside.

"That's his speed show," Nugent-Hopkins said. "He does little things in the corners, too, where he separates himself quickly. That's where he'll get a lot of his opportunities and goals, when he separates himself from a guy, moves it, and gets it back, then he's all alone."

Minutes later, McDavid spun around in the slot with a back-hander for another quality scoring chance. With the puck, he was dangerous on a handful of shifts.

"He's exciting to watch," alternate captain Matt Hendricks said. "A few bounces here, a few bounces there, we may have seen something different. I think he's going to be a great player down the road."

Where McDavid didn't do so well was on faceoffs, as he won only three of his 13 attempts. He lost six of his seven faceoffs against big Blues captain David Backes.

McLellan said he learned from talking to Sidney Crosby that the Pittsburgh Penguins captain made faceoffs the focal point of one summer and drastically improved. Edmonton's new coach also expects McDavid to get better with age.

"I have a 19-year-old son that plays junior hockey, and he looks just like Connor," McLellan said, referring to Tyson, who plays for Madison of the United States Hockey League. "I know my son couldn't play here. Connor can.

"Physically he's going to get stronger, he's going to learn the fine details of winning faceoffs. He's going to have to go through the league once or twice to get accustomed to it, and wingers have to help him a little bit, too."

"Both good players, Robby got on the scoreboard though," Blues defenceman Alex Pietrangelo said. "Plus one for us. That McDavid's going to be a good player. He's a special talent. Pretty impressed."

McDavid and Fabbri traded text messages this week about playing against one another. But McDavid wasn't thrilled to see him score against the Oilers.

"I guess I've got some bragging rights," Fabbri said. "We'll see how long that lasts."

Even while acknowledging that McDavid's play will be dissected because the phenom is under the microscope, McLellan doesn't want anyone to overreact one way or the other about one game.

Notes — New Edmonton goaltender Cam Talbot stopped 28 of the 30 shots he faced. Elliott, who is from McDavid's hometown of Newmarket, Ont., made 23 saves. ... Vladimir Tarasenko scored the Blues' first goal after he got past the Oilers defence and Pietrangelo sprung him on a breakaway.

Note to readers: This is an updated version of an earlier story. McDavid won three of 13 faceoffs, not three of 10 as previously stated.