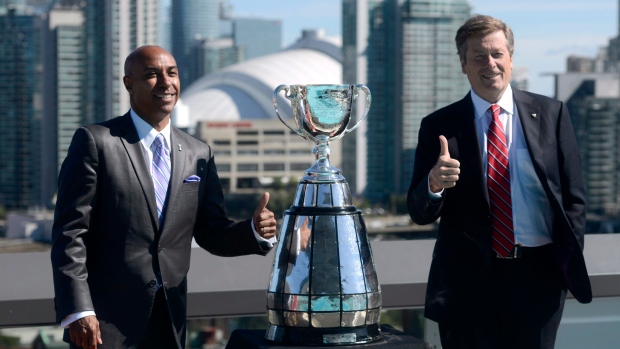 Orridge and Tory , The Canadian Press

TORONTO - The CFL will bring its championship game back to Toronto next year and this time it will have more of a true football feel.

The 2016 Grey Cup will be played outdoors on grass at a refurbished BMO Field, which will become the new home of the Argonauts when they move out of Rogers Centre after this season. The 104th edition of the Grey Cup is set for Nov. 27, 2016.

"We think this is the perfect opportunity," said CFL commissioner Jeffrey Orridge. "It's going to culminate the debut of the new era of Toronto Argonauts football and also it helps set the stage for the new era of the CFL. It's a beautiful stadium and it's a newly renovated stadium.

"So it's a perfect environment for us to play and it really does symbolize the new CFL with great stadiums and great social events."

Maple Leaf Sports & Entertainment chairman Larry Tanenbaum, who will become the Argos' co-owner at the end of the year, was joined by Orridge, Toronto Mayor John Tory and league officials for Thursday's formal announcement, which was made on a hotel rooftop patio with both stadiums visible across the skyline.

A glimpse to the east provided a view of the cavernous dome tucked in among the downtown skyscrapers while BMO Field — built on the same site as the old Exhibition Stadium — could be seen to the west. The 2016 game will offer a retro feel for local fans, who often dealt with rain, snow and blustery conditions when the Argos played at "The Ex" before moving to SkyDome in 1989.

Toronto last hosted the Grey Cup in 2012 when the championship celebrated its 100th anniversary.

"As great as that event truly was, it was a celebration of our history," Orridge said. "The 2016 Grey Cup will be all about the future. The future of our game, the future of the CFL, and the bright future of the Toronto Argonauts here in Canada's biggest city."

It was a good news day for the Argonauts, who have endured a challenging season despite their 7-5 record. The Pan Am Games forced the team to play its first five games on the road, including the so-called home opener against Edmonton in Fort McMurray, Alta.

The Argonauts pre-emptively moved Tuesday's home game against the Redblacks to Ottawa because of potential conflicts with the Major League Baseball post-season schedule. They could be forced out again later this month if the Blue Jays have a long playoff run.

This year's Grey Cup will be played Nov. 29 at Winnipeg's Investors Group Field.

BMO Field, the home of Toronto FC, is slated to undergo another round of renovation after the current Major League Soccer season.

A canopy will be installed on three sides as well as a new lighting and sound system. A new hybrid grass surface will also be put in, which uses natural grass but reinforces it with artificial roots.

The renovation will also install seats that can be rolled back in the north and south stands to accommodate the longer CFL field and end zones. The first phase of renovations, completed before the current season, expanded stadium capacity to 30,000 with the addition of 8,400 seats in the east grandstand.

Additional washrooms, concessions and premium fans options were also added. The video board in the north stand was replaced by a larger HD display.

The first Grey Cup was played in 1909 at Toronto's Rosedale Field. The Argonauts later played at Varsity Stadium, which hosted the infamous Mud Bowl at the 1950 Grey Cup.

The last Grey Cup played at Exhibition Stadium was the so-called Rain Bowl in 1982.

Retired defensive tackle Adriano Belli, who helped the Argos win a Grey Cup at home in 2012, much prefers the outdoor setting.

"You get to see the players actually get dirty," he said. "You get to see a quarterback after he gets sacked with his helmet filled with a clump of grass. If it's a rainy game or if it's a snowy game, it adds so many different (variables) to the game that are pretty cool, (it's) truly Canadian football."