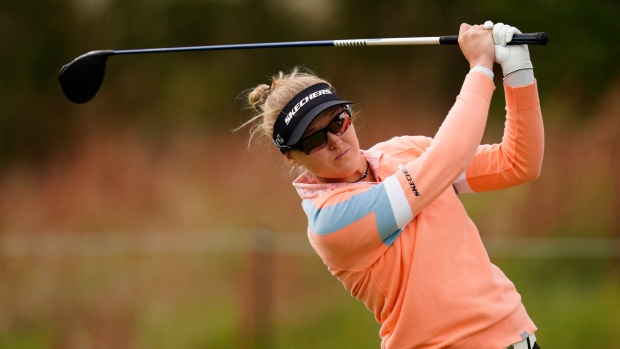 Brooke Henderson has already done a pretty good job at rewriting the record book. This week she has a chance to send it back to the printer one more time.

Henderson is going for a third consecutive victory at the Lotte Championship, which she won in 2018 and 2019. The event was cancelled last year due to the pandemic. If successful, she’d be the first golfer to three-peat on the LPGA Tour since Inbee Park won the KPMG Women’s PGA Championship from 2013-15.

“It’s definitely a rare opportunity, so it would be nice to make the most of it,” said Henderson in a press conference this week in Kapolei, Hawaii. “I’m just really excited for the chance. To be in this position is really cool.”

Henderson will have to overcome a few obstacles to get that third win. First is location. The tournament is being contested at Kapolei Golf Club, while her two victories, along with a 10th- and 11th-place finish, were at Ko Olina Golf Club.

The two courses were designed by architect Ted Robinson (who also designed Sahalee GC in Sammamish, Wash., where Henderson won the KPMG Women’s PGA Championship) and have some similarities but are different enough that she will need a revised game plan.

“This golf course, at first glance, looks very similar to Ko Olina, and then you get out there and there’s some more slopes and a lot of elevated greens, which you don’t see as much at Ko Olina,” Henderson observed. “Just like any time you’re playing in Hawaii, it’s very windy and you just have to play smart and hit quality golf shots to get the ball to go to where you want it to go.”

Along with sister and caddie Brittany, she’ll devise a game plan that will take into account the wind, greens and how to meander around the layout in the fewest strokes possible. Patience, Henderson stated, will also be a key to playing well.

So far this season, the stutter-step schedule offered up by the LPGA Tour hasn’t been to Henderson’s liking. Although she’s recorded two top-10 finishes in five starts, she prefers a more fluid itinerary. Rather than playing one week a month as the tour has done so far, she’d prefer to play week after week. It’s made the off-weeks difficult to manage, something she had to learn a year ago when the pandemic resulted in a lot of cancelled tournament.

“I wasn’t used to many off-weeks previous to 2020,” said Henderson, who averages 30 starts a year. “So, it was a big learning curve. We did a good job of just learning how to train in those off weeks, so when I came back from those I was still in competition mode, which is a lot different.

“You can practise every day but if you’re not in competition mode, you won’t play as well.”

Henderson has spent a great deal of her practice time trying to shore up her short game. She’d like to try and even out the hot and cold spells she experiences, especially with her putter.

When it’s on, she’s practically unbeatable. When it’s not, she struggles.

“Short game is always something I’ve been working on since I was young,” she admitted. “My strength has always been in the long game. If I can match the short game to how consistent I am with the long game I feel like really good things could happen in the future so I’m just trying to make small adjustments and small changes to get better.”

At the last tournament, the ANA Inspiration, she experimented with changing her grip on putts inside 10 feet, switching the position of her hands. While it felt good in practice, she abandoned it mid-way through the tournament and isn’t expecting it to come back this week.

It’s coming up on two years since Henderson last won a tournament. She failed to lift a trophy last year in the shortened season after winning twice in each of the previous four years. But she knows that trying too hard is something she has to avoid.

“I’m definitely eager to be back in the winner’s circle,” said the 23-year-old. “It’s not really something you can push too hard towards. You have to get the breaks and you have to play really well and be smart. But you also need the breaks so I’m just kind of waiting for that to happen and hopefully it’s in the near future.”

This week would be a special time for her to earn her 10th career win and set records in the process.