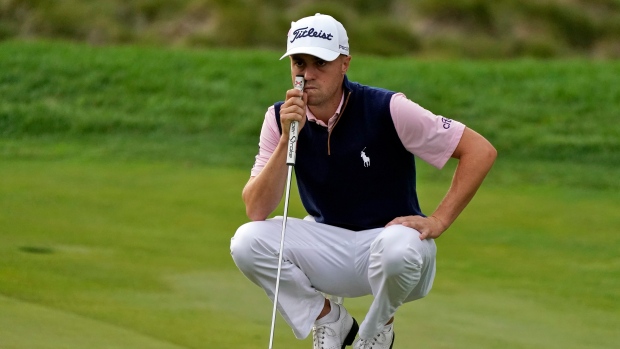 After a lengthy and entertaining finish to the first FedEx Cup event, the tour moves to the BMW Championship and Caves Valley Golf Club, a Baltimore, Md.-area course very few of the combatants have seen before.

While the PGA Tour has never visited, the course has been the site of past PGA Tour Champions and LPGA Tour events.

The course features generous landing areas off the tees, although officials have tried to narrow them somewhat. The greens are small, averaging about 5,200 square feet.

There is a bit of give and take with the length, with a number of par 4s in excess of 450 yards and a few under 370 that can be attacked. A proper gameplan will be in order.

Yup, playing the last four holes in two over wasn’t what we saw in the script last week and as a result, there was an appearance by Hot Jon, who was steamed by his slip when he was in control of the tournament. It was a fourth straight top 10 for the big Spaniard and his 12th overall on the season. He is first in Strokes Gained: Total, which should tell you he’s playing well throughout the bag. Rahm is too good to not find his way up to the top of the leaderboard again.

A fourth-place finish last week at the Northern Trust is the best by Thomas since he won the Players back in March. He might have been even better except for a sloppy final round that included three bogeys and a double. He still managed to birdie four of the last seven holes shoot 70. There’s a lot to like about Thomas’s game right now, including his putting. In his last seven starts he’s been inside the top 15 on the greens.

Who is the most rested guy at Caves Valley this week? It’s Oosthuizen, who skipped last week’s tournament with a sore neck and missed out on the extended version of the Northern Trust. That might help the player who hasn’t been out of the top 20 in his last eight starts and has four runner-up finishes in that stretch. Now that we’ve seen Abraham Ancer and Tony Finau end winless droughts, it’s about time the South African did the same.

Buoyed by a brilliant third-round 62 that earned him a tie for eighth at the Northern Trust, Conners has all but locked up a spot in the Tour Championship. He sits 20th in the FedEx Cup standings as he heads to the BMW Championship. We know he hits lots of fairways (ninth in driving accuracy) and lots of greens (11th in greens in regulation), and if he can shore up his short game even slightly this week – he as 0-4 in sand saves last week and tied for 85th in scrambling – he could find his way even higher on the leaderboard this week.

Tied for 11th last week, which is his best finish since May and that was largely due to some solid putting. He averaged 26.8 putts per round, his best of the season. His numbers tee to green and around the green have improved considerably since the start of the season and it seems as if he’s finding his stride at the best time of the year. Sitting in 32nd spot in the FedEx Cup standings might also sharpen his focus.

Here’s another player looking for that first PGA Tour victory in a career of solid play. He’s been inside the top 26 in his last four starts including a tie for 21st last week. Tringale is one of the tour’s top putters, sitting 13th in Strokes Gained: Putting. He’s especially good on bentgrass greens, which just happens to be the grass on the greens at Caves Valley. If he can keep the driver in play, he should be able to stay up near the top of the leaderboard. As with Bradley, he’s in 34th spot on the FedEx Cup standings, so he needs to be dialled in to move up the necessary rungs on the ladder to make it to the Tour Championship.