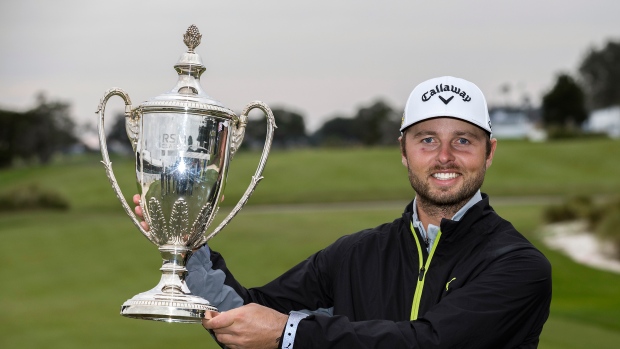 When the first round of the RSM Classic was over, Adam Svensson wasn’t thinking about much more than just making the cut. His 73 left him tied for 108th. Three spectacular rounds later, he was a PGA Tour winner.

Svensson played his final 54 holes at 20 under par to earn a three-shot win over Brian Harman, Saheeth Theegala and Callum Tarren.

“Just knowing that I’m playing great golf and I didn’t want to go home and miss the cut,” answered Svensson when asked what drove him to play so well on Friday. “And I just kept grinding and pushing somehow, made the cut and went from there.”

Svensson has had opportunities to win in his previous 69 starts on the PGA Tour but was never able to finish the job. On Sunday, he started off hoping to play smart, rather than wildly aggressive, and eliminate any bogeys from his scorecard. After a cautious and smart start, he made birdie on the fourth hole and then made three in four holes starting at the eighth. He drained a 17-foot putt on the 16th hole for birdie that gave him the lead and added another on the 17th, rolling in a 10-footer for a two-shot advantage. An easy par on the 18th sealed the win.

“I think the difference was experience, using those past rounds and learning from them and not playing as aggressive on Sunday,” he said of the key to getting the title. “I feel like I did that sometimes and made a lot of bogeys and I kind of mess it up. Today, I did a great job of just staying calm and hitting the middle of the green and just kind of using the putter as my weapon.”

The victory made him the 16th Canadian to win on the PGA Tour and it came with a big bag of add-ons. He’ll tee it up on the Masters and likely the other three majors – the 28-year-old has never played any of the majors yet – as well as the Players Championship and the Sentry Tournament of Champions.

The winner’s cheque of $1.4 million was sweet as well.

For Svensson, however, the best part of the win was how he has matured as a player and a person. As a standout amateur golfer, much was expected of the Surrey, B.C., product when he turned professional. It seemed he was destined for great things quickly on the PGA Tour. But that didn’t happen. His game lost some of that lustre and his confidence evaporated with it.

In the 2019 season, he missed the cut 14 times in 25 starts and his best finish was a tie for 15th. He was sent down to the Korn Ferry tour where, rather than wallow in his poor play, he used it as motivation and made a commitment to himself that he needed to work harder and be dedicated to his profession.

“You know the money's great, obviously, but I'm more proud of myself for the changes I've made in my life and, you know, the direction I'm going,” he said. “It's a better feeling than making a million bucks.

“All those early mornings, waking up, hitting balls and long hours of putting and just thinking, 'Am I going to do it?' There was stress, anxiety and it takes a toll on some players, so I’m just thankful that I came out here on top.”

Svensson’s win comes in the last PGA Tour start of the calendar year. It marks the first year since 2007 that two different Canadians have won in the same season. Mackenzie Hughes, who won the RSM Classic in 2016, captured the Sanderson Farms Championship in October.

For the 28-year-old Svensson, the win is the culmination of a long road that’s brought him to the winner’s circle.

“You know growing up having a dream of winning on the PGA Tour,” he said, “and you put all this time and effort into it and to see it actually pay off because you never know, it’s amazing.”