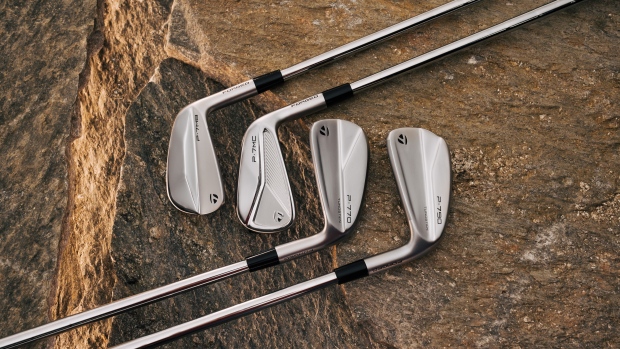 TaylorMade has a new addition to its P-700 series with the P-770, P-7MC and P-7MB irons. Along with the P-790, the collection of irons is built on the foundation of feel, craftsmanship and performance.

That’s done through a sleek design that features a compact shape with a thinner top line, less offset in the long irons and a shorter blade length than the 790.

The irons feature a hollow-body construction and a forged face, which lead to distance, forgiveness and feel.

The irons also feature what TaylorMade calls the FLTD CG, which is essentially moves the centre of gravity higher throughout the clubs to the shorter, weaker-lofted ones. This is done through clever use of tungsten weights and it creates easier launch and playability in the long irons and more trajectory and spin in the scoring clubs.

Sound in the irons has also been improved through the use of the company’s SpeedFoam Air, which is 69 per cent less dense than the first generation of SpeedFoam. This also helps the feel on shots telling you when you’ve hit that perfect spot on the club.

More speed is not only delivered by the thin face in the P-770 but also with the company’s Thru-Slot Speed Pocket and the Inverted Cone Technology. Both help with forgiveness across the face, especially low where most of the missed shots occur.

“P-Series irons need to be technical, elegant and timeless and the new P·770 design has all of that in spades,” said Matt Bovee, TaylorMade’s director, irons product creation, in a company release.

“We wanted to take as much performance and hide it on the inside of the iron to where you look at it and it looks like a clean and classic iron with the pearl satin chrome finish and hint of mirror on the toe. On the inside, the technology we have poured into this iron creates a product that we believe is truly one of one in this space.”

The P-7MC is designed to fit the eye of discerning players. It has little offset and minor perimeter weighting and features a classic blade shape.

The P-7MB was built with the game’s best players in mind. It delivers surgical control and precision with each shot while offering lots of feedback. These are the clubs likely to make it into PGA Tour players’ bags.