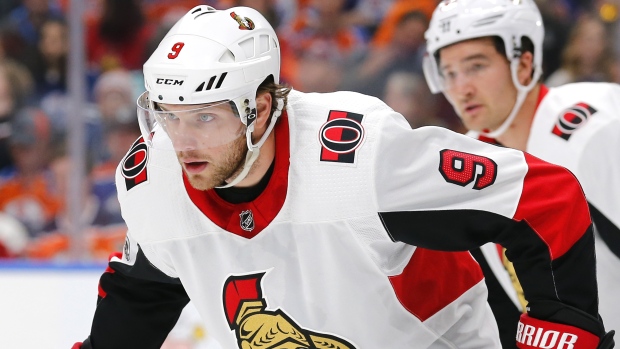 The veteran forward was well aware he would be peppered with questions about his extended absence from the Ottawa Senators for the past three months. On Friday morning, he decided to open up about the reasons for his departure from the team.

“I’ve dreaded this day for the better part of three months. But if you’re going to stand here and take time to heal yourself, you’re going to have to face the music,” Ryan said to a group of reporters gathered at his locker stall inside Canadian Tire Centre. "I spent two weeks agonizing over the fact it was going to be a media thing for me.”

Until now, the only explanation for Ryan’s leave was a purposely vague joint press release from the NHL and NHLPA on Nov. 20, stating he would be away from the team while participating in the league’s player assistance program.

On Friday, Ryan bravely shared that he has been undergoing extensive treatment for alcohol abuse.

Things came to a head during a Senators practice on Nov. 18, when Ryan abruptly left the team. In an emotional conversation with reporters on Friday, Ryan said he had reached a breaking point in his battle with alcohol that day in Detroit.

“I guess you can call it a panic attack, but it was more of a realization that the route that I was going had no good end in sight,” Ryan admitted. “And that’s not just professionally — that’s personally."

The 32-year-old said he was caught in a vicious cycle, where he was trying to handle the situation on his own — but without any long-term success.

“It’s something I’ve been battling for a while,” he said. “I’ve tried on my own and I was already getting help for it. What I was doing wasn’t enough. I was trying to white-knuckle things and trying to do things the wrong way.”

Ryan said he was able to stay sober for small stretches, but would ultimately relapse into his old, familiar habits.

“It would be 20 days of nothing and then one real bad day,” he explained.

Ryan headed to an in-patient clinic to seek a permanent solution for his problems. He said it was something he contemplated doing last summer, but only mustered up the courage to do in November.

“The issue for me was stopping. I just had never had a period in my life where people were around me to help me really stop,” Ryan said. “It took me going somewhere to figure that out. And getting a dry period to start out was very beneficial to me.”

Ryan called the support of his fellow NHLers “overwhelming,” saying a number of players who have battled a substance abuse issue reached out to him directly. He said that while some of the players have publicly shared their journeys, he was surprised at the number of fellow NHLers who contacted him that went through the program anonymously.

“Some guys reached out and I had no clue they did it,” Ryan said.

At the height of his issues, Ryan said he was constantly battling insomnia. When he would wake up from choppy sleeps, he would often be overridden with feelings of guilt and shame. It was certainly not the recipe for success for an average hockey player, let alone a star commanding a $7 million annual salary.

But Ryan, as many fans know, is not your average NHL player. His atypical path to stardom has been widely documented over the years – starting with a dysfunctional childhood that saw his father change their family name and moving across the country to evade law enforcement. Ryan’s father was accused of domestic assault against his wife and, in order to avoid jail time, he moved the family to California in an attempt to build a new life.

Two decades later, Ryan admits that he is still carrying baggage from his abnormal upbringing.

“A lot of what I’ve been through has been very public,” he said, alluding to his childhood. “I had a lot of issues surrounding that. I know now that for a very long time, I just kind of put my head down and never really dealt with it. I checked a lot of the metaphorical boxes from the time I was 15 on. And I got hit with waves of it in the past little while and haven’t handled any of those waves right for a long period of time, and things just continued to escalate for the past three years.”

Ryan acknowledges that he’s made strides in therapy, but coming to terms with his childhood emotions is still a work in progress.

“It’s something I need to let go and put in my past. I’m still continuing to let go of some more of it,” he said. He made a point of saying that while the therapy sessions have been difficult, he will continue to go through them in the months ahead.

The death of his mother, Melody, in the summer of 2016 after a battle with liver cancer did not help matters for Ryan, who admitted on Friday that his problem has been mounting for the better part of three years. He did acknowledge that his wife, Danielle, who he called “a rock star” throughout this whole ordeal, and their two young children were a catalyst in him seeking help a few months ago.

“I got to point where I said is enough is enough with the shame and guilt and not being the person you need to be for your family,” Ryan said.

While he admits to being apprehensive about having to share his story on such a public platform, Ryan said he hopes it helps other people who are battling addictions to consider seeking help.

“I guess in that sense there’s a silver lining. I would like to be a role model for other reasons. Everything has led me to here. I wish it hadn’t taken so long for me to get here,” Ryan explained. “If there’s anybody that hears it in some sense and recognize something and find a way to ask for help — hopefully less publicly — then I urge them to do it.”

Ryan, who produced just one goal in 16 games this season, said that his return to the lineup is imminent and he anticipates rejoining the team in the next two weeks. Looking trim and lean, Ryan says he's lost about 10 pounds and has cleared all of the medical and physical testing required to return to the lineup.

When he does make his return, Ryan knows there will be a degree of cynicism in the marketplace for a player who has largely failed to live up to the massive seven-year, $50 million contract he signed in the fall of 2014.

“People have reservations about where I’m at in my career and my contract and I understand that. I’m not saying that I’m going come out of this and play to the $7 million dollar guy that I want to be as much as everyone else does," he said. “But this is a chance for me to reset and prove that I can play in this league and that I can contribute.”

Ryan is hopeful that his chance to return is during a home game. While the club has not given Ryan an indication of a potential return date, Thursday's home game against the Vancouver Canucks could be a realistic target. Ryan emphasized that it would be more meaningful for him for his return to take place at Canadian Tire Centre.

“In a sense, I hope it’s at home because my wife and kids will be here for that,” Ryan said to wrap up his media session, his voice cracking with emotion for the first time. “They’ve earned this as much as I have.”