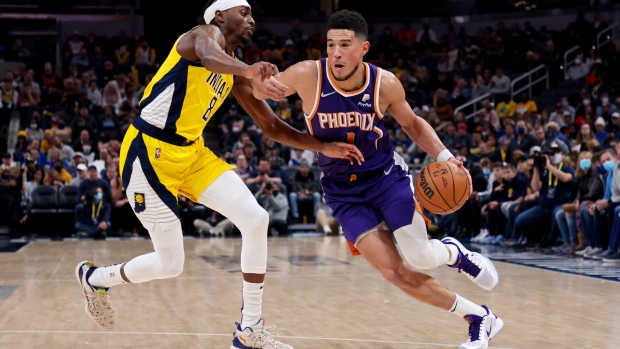 Chris Paul added 12 points and nine assist for Phoenix, and Cam Payne had 11 points and five assists. The Suns finished the first half of the season 32-9, their second-best record in franchise history through the first 41 games.

Justin Holiday scored 25 points for Indiana, Caris LeVert had 20, and Domantas Sabonis added 14 points and 14 rebounds. The Pacers have lost three in a row and nine of 10.

Neither team shot well in a low-scoring first half, with the Suns ahead 46-38 lead at the intermission.

Suns: Cam Johnson did not play for the second consecutive game because of a left ankle sprain.

Pacers: Jeremy Lamb was sidelined with a sore left knee. … Malcolm Brogdon, who played 17 minutes Wednesday night in a loss to Boston, was out with a sore right Achilles. The game against Boston was his first since Dec. 21 because of the Achilles injury. … Chris Duarte returned after missing the previous two games because of the birth of his daughter.

Suns: At Detroit on Sunday.