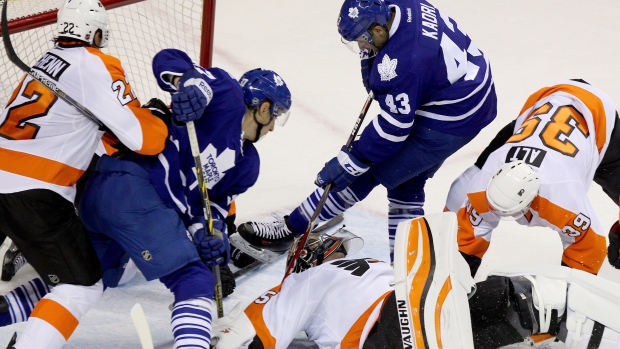 Kadri had a goal and an assist in regulation time as the Toronto Maple Leafs edged the Philadelphia Flyers 3-2 in the shootout in an NHL pre-season game in London, Ont.

"I'm from here and I just don't want to disappoint, I guess," said Kadri, who had 20 goals and 30 assists last season. "Production will be hugely important for me this year. I'm an offensive player. My goal is also to become a player who is the whole package. I think I was better on the draws today and working coming back in my own end."

David Booth was the lone scorer in the shootout. Booth, who had nine goals and 19 points with Vancouver last season, joined the Leafs in the off-season on a one-year deal signed in July.

Matt Read and Michael Raffl built a 2-0 lead for the Flyers, who were the home team in this contest for line changes.

Kadri's goal late in the second period shifted the momentum for Toronto. He then set up Tom Nilsson for the tying goal 1:39 into the third period. Kadri sent a cross-ice pass to defenceman Nilsson breaking off the point and a one-timer beat Flyers goalie Anthony Stolarz.

Stolarz is no stranger to London either, having played for the Ontario Hockey League's London Knights before Philadelphia selected him in the second round of the 2012 draft.

Starter Christopher Gibson stopped 11 of 12 in 31 minutes for Toronto, while Cal Heeter allowed a goal early in his second-half duty but recovered to be the winning goalie with 11 saves also on a dozen shots, plus three more saves in the shootout.

"I think I came in a little cold. I was pretty flat-footed on that first goal (by Raffl)," admitted Heeter, who played in the Flyers system last year, including one appearance with Philadelphia and 44 more with the American Hockey League's Adirondack Phantoms.

"I competed and battled well," said Heeter, who wore Flyers pads. "It wasn't the smoothest or best game I've played. I was a little choppy at times with my movement and on some rebounds."

It would appear Heeter, Gibson, Antoine Bibeau and Garret Sparks will battle for the two positions with the Toronto Marlies, with Jonathan Bernier and James Reimer owning the Leafs crease.

Nick Cousins, who had 11 goals and 18 assists last season for the Phantoms, hopes to earn a full-time promotion as he contributed assists on both Philadelphia goals.

"It's all about how well we did on working on the three things we are asking our players to concentrate on," said Carlyle. "We're working on defensive zone coverage, fore-checking systems, and play in the neutral zone.

Carlyle said it was a chance for his new coaching staff to integrate with the Leafs' players.

"We really are not doing a lot of things drastically different, but we are working on some ideas with our new group of coaches here," said Carlyle, referring to new assistants Steve Spott and Peter Horachek.

The two teams will meet again on Tuesday at Toronto's Air Canada Centre at 7 p.m. ET.

The Flyers' other split squad edged the Washington Capitals 5-4 in Philadelphia on Monday.