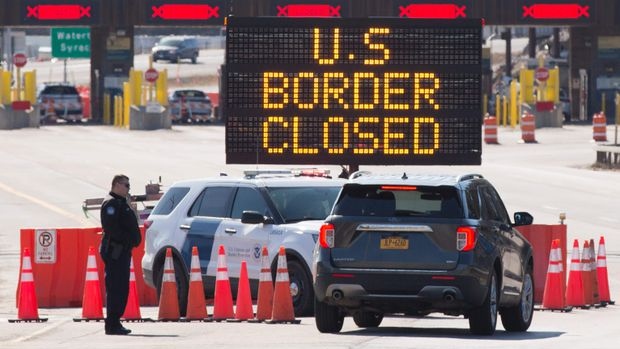 Canada and the United States agreed on Tuesday to keep their shared border closed until at least June 21.

But the National Hockey League and NHL Players’ Association do not believe Tuesday’s extension will alter their plans as they continue to work toward resuming the 2019-20 season this summer.

The reason for that hope is that the border only remains closed for “non-essential travel,” which is defined as tourism, recreation and entertainment.

Healthy people may continue to cross the border for “non-discretionary” reasons – for work and employment purposes - and NHL players and team personnel fall into that category.

Most non-Canadian players on Canadian NHL clubs hold a work permit, according to an immigration source, which would qualify them as a temporary worker and allow them to cross the border during the pandemic.

A similar work visa exists for Canadian players who play for U.S.-based teams.

Nearly half of the Winnipeg Jets and Vancouver Canucks rosters are comprised of American-born players, while stars on other Canadian clubs (Auston Matthews and Johnny Gaudreau) are also American. Then there are Toronto Maple Leafs and Montreal Canadiens goaltenders Carey Price and Frederik Andersen (from Denmark), who have both spent the bulk of their time during the NHL’s 10-week pause living in the United States.

NHL commissioner Gary Bettman disclosed in an interview Monday that approximately 17 per cent of the league’s players are currently riding out the COVID-19 pandemic in Europe.

The NHL still hopes to move to Phase 2 of its return-to-play protocol, which involves opening team practice facilities for players to train in small groups, before the end of May.

That Phase 2 portion will be optional for players; they will not be required to return to their team’s city. Any player or team personnel crossing the border will be expected to quarantine for 14 days.

“Your plan must include a place to stay for 14 days upon arrival in Canada,” Immigration, Refugees and Citizenship Canada’s website says. “This is mandatory, even if you have no symptoms. When you arrive in Canada, we’ll assess your health and your quarantine plan before you leave your port of entry.”

The NHL Players’ Association’s executive board, comprised of one representative from each of the league’s 31 clubs, voted on Tuesday to again defer a decision on distribution of the players’ final paycheques for the 2019-20 regular season.

The NHLPA previously voted to defer payment in April.

The final cheques, which were due to be distributed on April 15, account for approximately $140 million (U.S.) in pay and covered the final 12 working days of the regular season.

Players had 14 per cent of gross pay withheld from their first 12 paycheques of the season into an escrow account to ensure a proper 50-50 revenue split with owners, as per the Collective Bargaining Agreement.

Players can vote to contribute their final cheques to that escrow total, which would bring their collective withholding rate to approximately 16.5 per cent for the season. That would make a small dent on the upwards of 35 total per cent they could owe to owners to make them whole for revenue lost due to the pandemic.

Or, players can vote to collect their final paycheques, which would leave a larger balance owing to owners in the future.

Players have been split on the issue. Any player who retires after the 2019-20 season or does not return to play in 2020-21 will not be subject to the amount owed to owners, and those players would like to collect their final cheques. Younger players, including players who have not yet entered the league, will be stuck with the bill.

The NHLPA expects a final decision on the last cheque by May 31, at which point in time players hope to have a better understanding of the league’s return-to-play format and financial picture, with projections on potential revenue that could be recouped.

Players would not be paid to return to finish the 2019-20 campaign since they have been paid in advance; any revenue brought in would go towards offsetting that larger payment due to owners in the future.