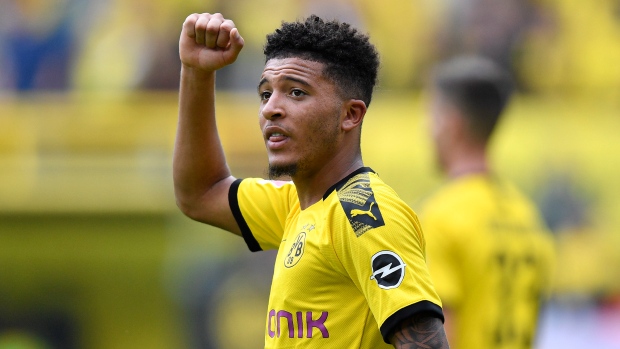 BERLIN — Borussia Dortmund began its bid to wrench the Bundesliga title from Bayern Munich with a 5-1 rout of Augsburg on Saturday.

Encouraged by Bayern's 2-2 draw with Hertha Berlin in the league opener on Friday, Dortmund was keen to deliver a statement to the seven-time defending champion.

But Dortmund was still settling into the game with Mats Hummels back in defence when Florian Niederlechner scored in the first minute for the visitors. Hummels, back after a successful three years in Munich, was among those badly positioned to deal with Nils Pedersen's cross for Niederlechner.

Reus drew a good save from Koubek as Dortmund pushed for more, but the hosts had to wait till the 51st for Jadon Sancho to break the deadlock. Sancho shot beyond the flailing Koubek after Augsburg's defence failed to deal with Axel Witsel on the left.

Alcacer set up Reus for 3-1, two minutes before the Spain striker fired inside the right corner for his second.

Witsel crossed for substitute Julian Brandt to complete the scoring in the 82nd and mark his Dortmund debut with a goal.

"We were surprised early on, but we stayed calm," Dortmund coach Lucien Favre said. "We were better after that with 78% ball possession. We increased the tempo even more in the second half."

Bayer Leverkusen defeated promoted Paderborn 3-2 but the home side was fortunate not to have Wendell sent off in the first half when he used his hands to save Sven Michel's goal-bound strike before the line.

Play continued and Streli Mamba converted the rebound to level for 2-2 in the 25th. Wendell was then shown a yellow card when a red card and penalty would have been more beneficial to Paderborn with 65 minutes of the game remaining.

Cologne also lost on its return in a 2-1 defeat at Wolfsburg.

Werder Bremen overtook Hamburger SV with the most appearances in the Bundesliga as it played its 1,867th game in Germany's top flight. But Fortuna Düsseldorf was in no mood to join in the home side's celebrations and took advantage of defensive mistakes to win 3-1. It was Düsseldorf's first win in Bremen since 1977.

Freiburg scored three late goals in a 3-0 win over Mainz.

Borussia Mönchengladbach coach Marco Rose and Schalke counterpart David Wagner each had to be content with a point from their Bundesliga coaching debuts in an error-strewn 0-0 draw in the late game.

Altogether, eight coaches were to take or had taken charge of their first Bundesliga games over the weekend.

Union Berlin coach Urs Fischer - like the club - was to make his league debut against Leipzig on Sunday.