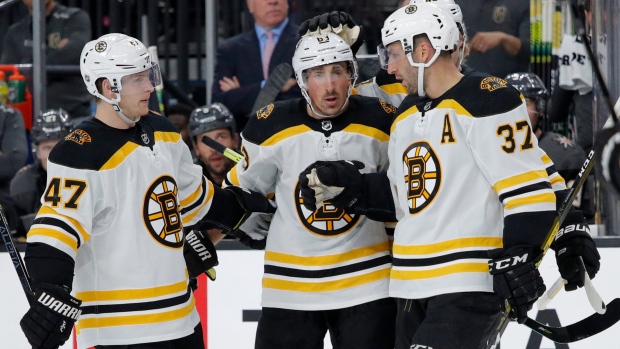 LAS VEGAS — Brad Marchand had two goals and an assist to lead the Boston Bruins over the Vegas Golden Knights 4-3 on Tuesday night.

The Bruins (3-0-0) remained undefeated as they continue their four-game road trip to start the season, all against Western Conference teams. Boston has outscored Dallas, Arizona and Vegas 7-3, and won its first three games for the first time in the past 18 seasons.

David Pastrnak and Torey Krug also scored for the Bruins, and Tuukka Rask made 31 saves.

Rask moved into sole possession of 49th place with his 267th career win. The 32-year-old goalie, one win shy of tying Don Beaupre, needed help off the ice at the conclusion of the game.

Marc-Andre Fleury made 31 saves but dropped to 12-8-5 against the Bruins with a .915 save percentage.

Vegas started out strong with back-to-back goals in the first period by Stone and Smith to take a 2-0 lead in the first 8:20.

But the defending Eastern Conference champions answered with four goals — three from their top line of Marchand, Pastrnak and Patrice Bergeron.

Marchand scored 33 seconds into the second period to put Boston ahead 3-2, handing Vegas its first deficit of the young season.

With Boston's Chris Wagner and Vegas' Nick Holden battling for position in front of Fleury, Krug extended the lead with a blistering slap shot that got through traffic and made it 4-2.

The Golden Knights, who didn't get their first shot on goal in the third period until there was 8:28 left in the game, made it a one-goal game when Pacioretty beat Rusk with his first of the season, a power-play goal with 5:18 remaining.

NOTES: Bruins captain Zdeno Chara, 42, appeared in his 1,488th game, breaking a tie with Wayne Gretzky for the 23rd-most in history. ... Chara and San Jose's Joe Thornton, 40, are the two oldest active NHL players. They both made their debut in 1997 and are the only active players who played a game in the 1990s. ... The Golden Knights were one of three teams entering Tuesday that had yet to allow a power-play goal, along with Carolina and the Rangers. Both Carolina and Vegas allowed power-play goals in their respective games.

Bruins: At the Colorado Avalanche on Thursday.

Golden Knights: At the Arizona Coyotes on Thursday.