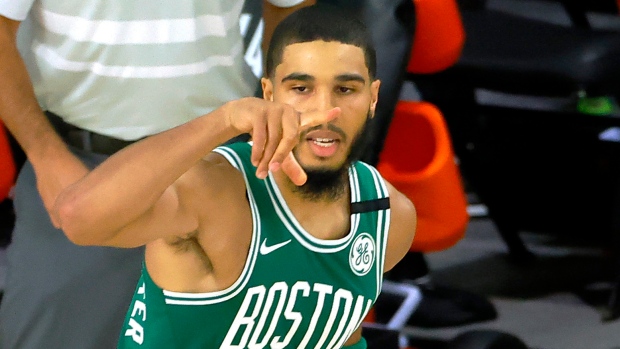 Jayson Tatum called himself out after the Boston Celtics lost 112-109 to the Miami Heat in Game 4 of the Eastern Conference finals to go down 3-1 in the series.

Tatum had zero points in the first half and was 0-for-6 from the field and 0-for-3 from beyond the arc.

"I wasn't aggressive enough," Tatum said. "I didn't score in the first half. That's unacceptable. So I knew I had to play better, and that's what I tried to do."

He finished the game with 28 points but the Celtics couldn't overcome the Heat and Tyler Herro's heroics which included 37 points on the night. The Celtics trailed by six points at halftime but turned the ball over 19 times to the Heat's eight.

"It's basketball," Celtics coach Brad Stevens said when asked why Tatum's first half was so far off his usual standard. "I don't want to oversimplify it, but we've all had nights where you don't feel like it's going for you. Then you go into the break -- or you've seen great players do that, at least -- where they go into the break and they can just reset, see one go through the net, and then they go."

Game 5 is scheduled for Friday night.