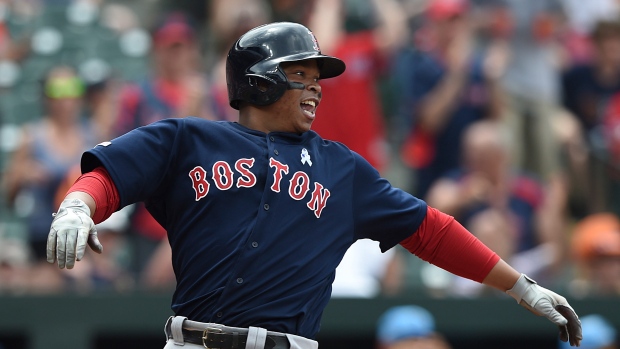 BALTIMORE — A comeback victory in a game that appeared to be lost enabled the Boston Red Sox to stroll out of Camden Yards feeling quite satisfied about where they stand at this point in the season.

Rafael Devers led off the 10th inning with a home run after Marco Hernandez tied it with a solo shot in the ninth, and Boston beat the Baltimore Orioles 8-6 Sunday to move a season-high five games over .500.

"Obviously we need to keep rolling and keep extending that," winning pitcher Brandon Workman said. "We set that goal for ourselves, and we were able to get it."

The Red Sox opened defence of their World Series title by losing their first four games this season and were 9-15 on April 23. Now they're 39-34 and within striking distance of the first-place Yankees in the AL East.

"There's a good vibe," manager Alex Cora said. "We didn't come out of the blocks the way we wanted, but it's still a long race. We're still in the hunt."

After winning the first two games of the series in blowout fashion, the Red Sox used some late heroics to complete the sweep and extend their winning streak to five.

Boston trailed 3-2 in the ninth before Hernandez connected off Mychal Givens, who avoided further damage by getting two straight strikeouts following a triple by Mookie Betts.

In the 10th, however, Givens (0-4) served up a 1-0 pitch that Devers slammed far over the centre-field wall. Betts and Christian Vazquez added two-out, two-run singles off David Hess, who was optioned to Triple-A Norfolk after the game.

"It was one of those that it was going to be an ugly loss, whatever, but now it's a great win," Cora said.

Brandon Workman (5-1) worked the ninth for the Red Sox. Boston's eighth pitcher, Josh Smith, gave up a two-run homer to Stevie Wilkerson and a bases-empty drive to Trey Mancini in the 10th before sealing the win.

"Everybody kind of stepped up and did their job throughout the game," Workman said. "Offence kept grinding out at bats and we were able to take the lead and win it."

Orioles manager Brandon Hyde was ejected in the fourth inning after arguing a call that cost Baltimore a run. Keon Broxton was called out for running in the baseline after laying down a successful squeeze bunt, which by rule sent Anthony Santander back to third base. Richie Martin subsequently struck out to end the inning, leaving the Orioles down 2-1.

The score stayed that way until the eighth.

Baltimore was 1 for 13 with runners in scoring position when Jonathan Villar drew a leadoff walk from Marcus Walden. Villar stole second, then stole third as Chris Davis expressed his displeasure over a called third strike and Vazquez looped his throw from behind the plate to the mound.

Villar scored on a wild pitch before Wilkerson greeted right-hander Travis Lakins with a pinch-hit triple and came home on a single by Hanser Alberto .

"Very strange game, but in the end it's a really tough loss," Mancini said. "Good clubs win those games, and hopefully soon, we'll do a better job of finishing games off."

"We've had our fair share of tough losses this year. I've never seen a club go through so much in the first few months of the season," Hyde said. "But I really liked the way we played today. We battled back twice. Johnny Villar made things happen, tied the game for us. A lot of good things happened in today's game. It just didn't end well."

Red Sox: Andrew Benintendi sat out the game with a sore quad. "Nothing serious," Cora said. ... 1B Steve Pearce (back) emerged unscathed from his first two rehabilitation games. "He felt good, moving around well. At the plate, he feels a lot better," Cora said.

Orioles: Andrew Cashner (6-2, 4.73) hopes a lingering blister won't be a problem when he faces the Oakland Athletics on the road Monday night. The right-hander missed his scheduled start Friday night.