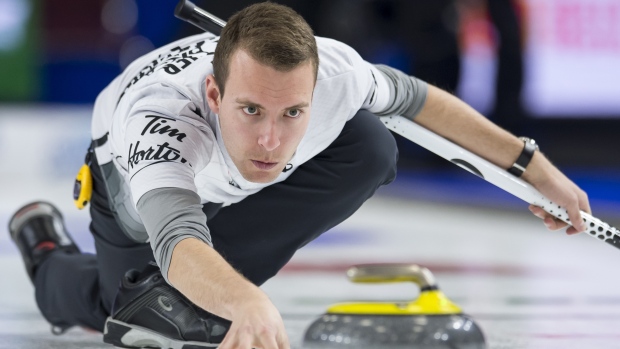 TORONTO — Kerri Einarson defeated Anna Hasselborg 5-4 in an extra end on Sunday to capture the women's title at the Players' Championship.

The win capped a string of four victories in a row for the rink from Gimli, Man., after looking to be out of contention with three straight losses earlier in the week.

The team of Einarson, Val Sweeting, Shannon Birchard and Briane Meilleur finished the round-robin portion of the tournament at 2-3, but ended as champions by running the table in their final four draws.

"It feels so amazing right now. We knew our backs were towards the wall and we had to find our groove again," said Einarson. "Especially given how we started this tournament to come up with this performance is truly special."

Hasselborg, the reigning Olympic champion, was undefeated in the tournament up until the final.

After a blank first end, Einarson had a nose-hit to lie two rocks. the Swedish skip knocked one of the rocks out which would require a measurement. The result was a steal of a single point for Einarson for a 1-0 lead after two.

Hasselborg would get on the board in the third end. She squeaked around an Einarson rock and followed the line for a deuce to take a 2-1 lead.

Einarson would pick up a single to tie it 2-2 in the fourth end, but her team had a lie of three wiped out after Hasselborg broke up the possibility.

With Hasselborg looking for the blank end with the hammer, her rink would miss on a hit-and-roll and their rock would stick to inadvertently concede the hammer while recording just a single to take a 3-2 lead.

In the sixth end, Einarson would take advantage by picking up a deuce for a 4-3 lead.

A blank end in the seventh would allow Hasselborg to retain the hammer going into the final end.

In the eighth end, Hasselborg would pick up a single after a measurement that forced the extra end.

"The eighth end got a little bit scary but we figured we would be second shot so makes it tough for her to win," said Einarson.

Meanwhile, Bottcher's rink, including Darren Moulding, Bradley Thiessen and Karrick Martin, earned a steal of four in the eighth and final end after Koe couldn't navigate through a sea of Bottcher stones in a crowded house.

"I think he had a shot for two had he been able to make it perfect. So I was a little nervous," Bottcher said of the final shot by Koe, "Of all the guys in curling, he’s the last guy you'd want to leave that shot for. Luckily we had one half shot and that was that."

It was a form of redemption for Bottcher's rink, who lost to Koe at the 2019 Tim Horton's Brier last month.

"We've had such a great year and to cap it off with a finish at the top couple of spots and a win against Koe I think is huge," Bottcher said. "It gives us the confidence going into next year and hopefully, we can keep the success going."

Bottcher got off to a good start with a steal of one in the opening end. He executed a double-raise double takeout to put up a pair of guards.

Koe's attempt to get around it on his final shot of the end missed the mark, allowing Bottcher to earn the steal.

In the third, Koe picked up one to make it 1-1 when forced to fire a shot raise double to prevent Bottcher from stealing more.

In the fifth, Bottcher was forced to play a shot to the button to pick up one but it could have been worse. With Koe crowding the house, Bottcher executed a triple takeout to eliminate any chance for Koe to steal.

The sixth and seventh ends were blanked as both teams attempted to position themselves in the best situation going into the eight and final end of regulation.