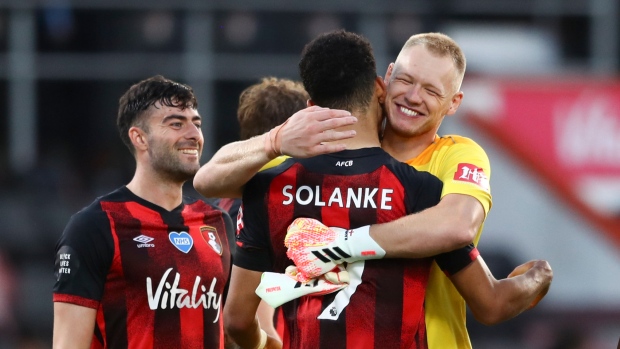 BOURNEMOUTH, England — Dominic Solanke scored twice as Bournemouth's bid for Premier League survival was boosted by a 4-1 victory over Champions League-chasing Leicester, which was reduced to 10 men on Sunday.

They were the striker's first goals since joining from Liverpool in January 2019 after failing to score in his 38 previous league appearances.

Bournemouth turned the game in its favour during a two-minute spell which saw Leicester lose a player.

Junior Stanislas equalized from the penalty spot in the 66th minute after Callum Wilson was dragged down by Wilfred Ndidi following a poor goal-kick from Kasper Schmeichel.

Solanke then put the hosts in front and Leicester defender Caglar Soyuncu was shown a straight red card in the aftermath for kicking out at Wilson as he attempted to retrieve the ball.

Bournemouth stretched its lead in the 83rd when Stanislas' strike across goal took a huge deflection off Jonny Evans to wrong-foot Schmeichel.

Solanke added a fourth to make sure of the points in the 87th, capitalizing on a loose pass before poking a shot between the legs of Schmeichel.

Leicester's Champions League hopes are now out of their hands after the capitulation. The 2016 champions stay fourth following a seventh away trip without success, leaving Manchester United with an opportunity to leapfrog them Monday when it hosts Southampton.