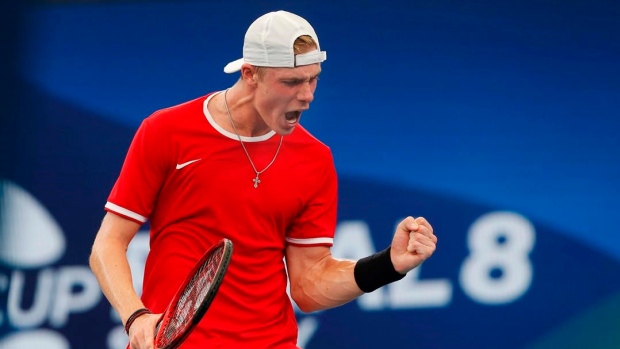 We are in a golden age of Canadian tennis.

On the women's side, 19-year-old Bianca Andreescu is the reigning US Open champion, Canada's first ever major winner in singles. Fellow teenager Leylah Annie Fernandez is the biggest riser in the top 300 this season going from 209 to 118 in just a few months. Meanwhile, Gaby Dabrowski is a top-10 force on the doubles scene.

On the men's side, there are three Canadians in the top 30. Denis Shapovalov (No. 16) and Felix Auger-Aliassime (No. 20) are still quite young while 29-year-old Milos Raonic (No. 30) has a major final appearance (Wimbledon 2016) on his resume . And now Vasek Pospisil, also 29, is back in the top 100 after missing time following back surgery.

The tours are suspended through the grass-court season in mid-July due to the COVID-19 pandemic and the hiatus will likely last even longer than that. The WTA event in Montreal, set for early August, has already been postponed.  But whenever tennis does return, Canadian fans are in for a treat. Not only is there plenty of Canadian talent, but our country's stars are competing against some of the all-time greats.

ESPN analyst Brad Gilbert spoke to TSN via Skype on Wednesday and outlined what the next step looks like for Canada's top players and how this lengthy pause in play will impact the grand slam race between Roger Federer (20 majors), Rafael Nadal (19) and Novak Djokovic (17) as well as Serena Williams' quest for an elusive 24th major.

Denis Shapovalov is celebrating his 21st birthday on Wednesday. He's already Canada's top-ranked men's player. What's the next step look like for him?

"It's incredible that he's already been at this high level, in the top 50, for over three years. You almost think he's 25, you forget that today he's just 21 ... The one thing that Denis needs, more than anything with his game, is the block return, a little bit like the Fed return, to get more returns in play and be more consistent week in and week out."

What should his good pal Auger-Aliassime be focusing on when it comes to improving his game?

"Consistency as well. I mean, he's had a couple of great periods and he's had a couple of periods where, all the sudden, he struggles for a little bit and that's natural for young players. At 19 your whole goal is to get better, to keep improving, keep working on your game, not worrying about anything else, but working on your game. Sure, he can develop his serve and improve his forehand, but I think consistency is a huge thing for him. Like Denis, he has time on his side."

Which Canadian man is most likely to will win a singles grand slam first?

"It's hard right now to assess things. Denis and Felix have way more time on their side. At some point the Big Three are going to get older and so their competition is going to be (Stefanos) Tsitsipas, (Alexander) Zverev, Dominic Thiem, it’s younger guys that they're going to be competing with five years from now.

"The window for (29-year-old) Milos is much smaller, but he did play as well as I've ever seen him play in getting to the quarterfinals in Australia. I was really impressed with his (third round) match against (No. 6 seed) Tsitsipas. I've never seen him return a ground stroke as well as he did in that match. Guys are playing a lot better into their thirties, but I like the younger guys chances. However, I don't want to make any predictions until we get back out on the tour. This is a strange time right now."

Does this long break favour anyone?

"I, honestly, don't know. I mean, maybe it will favour somebody we don't know about and all of the sudden some 17- or 18-year-old (emerges). It' s given Roger Federer a chance to heal. Novak and Rafa had a mental edge on the field, but if you don't play for six months, I mean, this is unprecedented. Usually when you don't play for six months it means you're coming back from a long injury.

"I do think, most importantly, it's about who is going to be able to maintain health? Who's going to be able to look like they're in great shape? I think we'll know pretty quickly. But I couldn't tell you, 'Wow, this is a big advantage for this player,' other than for Federer who was injured and this is giving him a chance to recover without anyone playing."

Federer holds the record for weeks at No. 1 at 310. Djokovic, the current No. 1, is third on the list at 282, but with the rankings frozen, it’s been ruled these weeks won't count. What do you think about that?

"Totally unlucky, because Novak had lost early in Indian Wells and Miami (last year) and there was a good chance, if he played well in those tournaments, that he'd be able to retain the ranking through Wimbledon and probably be right there. I feel like if they didn't do a freeze in the rankings and you lost points every week, Djokovic would (still) be No. 1 every week so I do think it’s unlucky. I kind of feel like if this goes 20 or 25 weeks, he might deserve to get those weeks ... but since they've jointly decided that's what they’re going to do, that's what they’re going to do."

I totally disagree the weeks at one ☝️ should totally count for Djoker during this freeze 🥶 period of the rankings, if the points were falling off every week during this time frame ND would maintain is number one spot till everyone points fell off in theory https://t.co/hZnfKUBAyF

The ATP has confirmed that the freeze to the FedEx ATP Rankings, effective March 16, 2020, also applies to any time-sensitive records over the suspension period of the Tour.

You mentioned Federer benefits from the break because he's injured. Do you feel the same way about Andreescu? Is she well positioned to come back strong after missing the early part of the season due to a knee injury?

"Availability is your best asset and since she's been about 14-years-old, every year it feels like she's had these significant injuries. And it's not just one injury, it's the elbow, the shoulder, the knee. I think, more than anything, that’s going to be the No. 1 issue to get figured out, 'How can I be healthy and play for long periods of time?' I do think the talent is there and she just needs to be healthy. She's always been able to come back strong. Last year, she played great in the first three months of the season, only plays one match at the French Open before Canada, and then comes back and turns it on.

"Had she been healthy toward the end of last year and the start of this year, I would've picked her to win the Australian Open, but you can't win it if you're not in it. Also, the longer you're out, the more your (aura of) invincibility to other players (declines). All the sudden they're like, 'Whoah, she's beatable, because she hasn't played.' But if she can get healthy she can do great things."

American Sofia Kenin and Andreescu are the last two major winners. It seems like we have the makings of a great cross-border rivalry here. How do you see that matchup?

"Well, they've played four times and had some feisty matches and Bibi had the edge. The only one Kenin won was in Acapulco. It's amazing that the last four grand slam winners: (Ashleigh) Barty at the French is maybe 5-foot-5, (Simona) Halep 5-foot-6 at Wimbledon, maybe Bibi’s 5-foot-6 and a half  and then Kenin lists herself at 5-foot-7, maybe she’s 5-foot-6, but basically you had four women who aren't six-footers. All of them have great wheels and got a lot of guile in their game so it’s an interesting time in women's tennis. I think it's a very open time. Barty is 3,000 points clear as No. 1, but I don't feel like she's dominant. I do feel like had Bibi been healthy she'd be No. 1, but right now there's opportunity for a lot of players."

Speaking of smaller players, what do you make of 17-year-old Canadian Leylah Annie Fernandez, who's listed at 5-foot-4?

"You know what's scary, 5-foot-4 is probably generous. I saw a couple times she was shaking hands with players in Mexico and one of them was 5-foot-7 and she was way shorter. She's shorter than I thought, but given the four players I just mentioned who won slams, I do think if she gets a little bit stronger physically there's no reason why she can't start by making the top 50 and go from there.

"I watched her play a couple times at the junior Australian Open in 2019 and was very impressed with her forehand, her serve. She has good guile in her lefty game. I definitely think with her size, being lefty will help her. She definitely has a clever serve and a good forehand so I think she's got a bright future."

From @markhmasters: Fernandez eager to continue her climb in the tennis world. MORE: https://t.co/TealJQR6hf pic.twitter.com/KtT03tymfi

How do you see this lengthy break in play impacting Serena's quest to get that elusive 24th major?

"It's an incredibly difficult question to answer, because everything will depend on when we come back and how long it is and if she able to maintain health. She was continuing to put herself in position to win slams, but I don't think that this ultimately helps. Missing Wimbledon, that was probably Serena's best chance ... I do know one thing, never underestimate Williams. She seems to thrive on very little competition and if she puts together one run, I wouldn't be shocked. But this time (off) is better if you're 18 or 19 than if you're 38."

With such a long pause in the season, there's a chance to re-evaluate things and take a look at the big picture. What changes should tennis consider?

"I really think between the ATP, WTA, ITF and the four grand slams, if those people got together and said, ‘You know what, we're going to have a commissioner of tennis, one voice instead of seven or eight different voices,' I think that would be great.

"And it would be great if we change the prize money structure. It looks great for the ATP, WTA and slams when they announce there's a five or seven per cent increase for the champion, but I think it's ridiculous that from the Round of 16 to the quarters to the semis to the finalist to the winner the amount doubles, doubles and doubles. It even does that in challenger events. So, I'd like to see better (distribution) in the prize money at slams and especially in 1,000-level events from the qualifiers through the first and second rounds."

Would you be interested in the job of commissioner?

"Negative. (Smiles) You need someone with good business acumen and somebody who is a great communicator and could really have a great understanding of what the slams want, what the ITF wants, what the WTA and ATP wants. I think the NBA, NFL, hockey, a lot of these sports seem to thrive because of a commissioner and I do think that is really paramount for tennis moving forward and getting everybody on the same page. Maybe, instead of talking about having to build a perfect schedule, we can actually do something about it ... it took us 35 years to get one extra week between the French Open and Wimbledon."