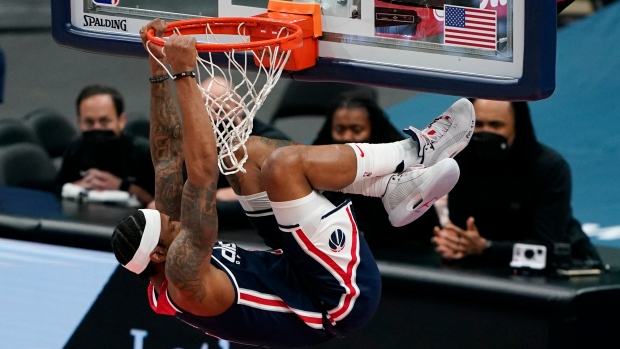 Bertans, who missed the previous two games while his wife gave birth to a son, finished with 21 points while making half of his dozen 3-point attempts. The Wizards have won five straight, matching a season high, and seven of eight to claw back into playoff contention in the Eastern Conference.

“It's a great feeling of knowing we're figuring it out, guys are growing and guys are starting to really play top-level basketball,” Beal said. “It definitely sucks that it kind of happens sort of at the end of the year.”

Russell Westbrook had 13 points, 17 assists and 11 rebounds for Washington. His 26th triple-double this season was only in doubt because of his dreadful shooting; Westbrook missed nine straight shots in the second half before a 3-pointer that gave the Wizards a nine-point lead with 3:47 left. He has 172 triple-doubles, closing in on Oscar Robertson’s record of 181.

“He had 17 assists tonight on a night I thought we did a good job on him. Great player,” Thunder coach Mark Daigneault said.

Darius Bazley scored a career-high 26 points for Oklahoma City, which extended its season-worst skid to 11 games. The Thunder have lost 14 of 15 since leading scorer Shai Gilgeous-Alexander was sidelined with a foot injury last month. Oklahoma City was even more undermanned without Lu Dort, who sat after scoring 29 points Sunday night against Toronto.

“Tonight was tremendous progress for us. That was tough travel. We got in late,” Daigneault said. “We were without Lu obviously, and (Isaiah) Roby, and these guys played. They really played tonight. The second quarter on, we really competed.”

“Just trying to stand my ground and keep him out of the paint,” the second-year player said. “I don't think I did too bad, but we still lost.”

Washington never trailed but allowed Oklahoma City to slink within one point late in the second quarter when Beal went cold temporarily. But Bertans hit a 3-pointer at the buzzer, part of a 12-0 run spanning halftime.

“If he shoots 12 3s a night, I’ll be the happiest coach in the league,” Wizards coach Scott Brooks said. “He should be able to get up to those attempts pretty consistently. When he shoots 3s, it makes us a better team.”

The Thunder got close again early in the fourth quarter, going on a 15-4 run while Westbrook couldn't connect. A layup by Tony Bradley brought Oklahoma City within two with 9:02 left, prompting Brooks to call timeout.

Robin Lopez made two hook shots to restore order, Beal and Bertans made consecutive 3s and the Wizards were on their way.

“Early in the year we wouldn't be able to close out games, and we would struggle,” Beal said. “Obviously having guys healthy helps, too.”

Thunder: Bradley scored 16 points and Kenrich Williams had 15. ... Dort sat with a strained right hip. He was Oklahoma City's leading scorer in the past three games he's played.

Wizards: Lopez scored 17 points on 7-of-9 shooting, fellow big man Daniel Gafford was 6 of 6 for 13 points and starting centre Alex Len went 3 for 3. ... F Rui Hachimura was out with a sore left knee after a knee-to-knee collision on Saturday against Detroit and is day to day, Brooks said. ... Len hit a driving Bazley in the face with his forearm late in the second quarter and was charged with a flagrant 1 foul. ... Beal's 3-pointer with 5:04 left in the third period was the first by any Wizard other than Bertans.

Thunder: At Indiana on Wednesday night to conclude a four-game trip.

Wizards: Host Stephen Curry, who is closing in on Beal's NBA-leading scoring average, and Golden State on Wednesday night in the first game this season with fans at Capital One Arena. “The mayor and our organization, they picked a great day to have fans,” Brooks said. “One of the most exciting players in the history of our game is coming to our building.”