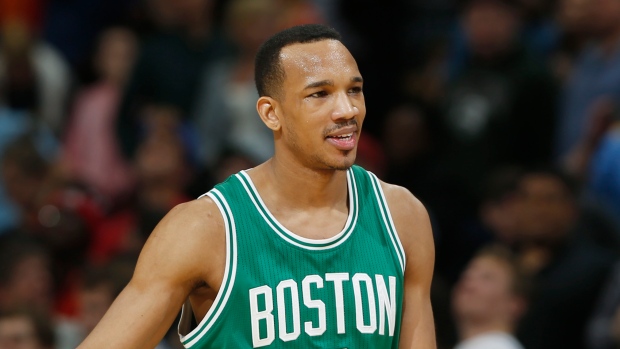 Bradley hit a go-ahead 3-pointer and a jumper to help secure the lead in the final 1:24, and the Boston Celtics hung on to beat Denver 100-99 on Friday night, sending the Nuggets to their fifth loss in a row.

"He hit two big ones," Celtics coach Brad Stevens said of Avery, who finished with 18 points. "The 3 he hit in the corner was a really tough shot. When he gets that rhythm, step-in shot, he's usually pretty good at it."

The Nuggets played without star guard Ty Lawson, who was away from the team for what the club said were personal reasons following his arrest earlier Friday for allegedly driving under the influence.

Jameer Nelson, acquired from Boston in exchange for Nate Robinson in a trade Jan. 13, had 23 points in his first start for the Nuggets in place of Lawson. But with Tayshaun Prince guarding him tightly, he missed a mid-range jumper at the buzzer that would have beaten his former team.

"Tayshaun is known as a good defender his entire career," Nelson said. "He forced me to take a tough shot. Could I have gotten a better one? Maybe. It was a good look. I got the separation that I needed. I've just got to make the shot, make the play. I felt good. It looked good. You just make some and you miss some. Move on to the next game."

Brandon Bass had 17 points and Jared Sullinger 14 for the Celtics, who won consecutive games for the first time since winning three straight in mid-December. They beat Portland on the front end of their back-to-back set on Thursday on a last-second 3-pointer by Evan Turner.

"It's great from a progress standpoint," Stevens said. "They're both close games, they're one-point games. They both came down to the last shot. As history suggests, this is a difficult game to get on the second of a back-to-back."

Nuggets coach Brian Shaw said the loss notwithstanding, he liked the way his team scrapped.

"I feel like we should have won regardless of all the circumstances surrounding this game, but you can feel better about a loss when you have that effort," Shaw said.

Arron Afflalo added 20 points for Denver, and J.J. Hickson had 15.

Boston trailed by as many as 12 points midway through the third quarter, but fought back to tie it at 67 on a 3-pointer by Marcus Smart. The Celtics led 75-74 going into the fourth quarter on Marcus Thornton's jumper in the lane.

Bradley hit a 3-pointer from the corner over Afflalo to put Boston up 98-96 with 1:24 left. Wilson Chandler made one of two free throws for Denver, but Bradley answered by connecting on a jumper.

With 14.7 seconds left, Hickson put in a layup to get the Nuggets back within a point. Turner was fouled and missed both free throws, leaving an opening for the Nuggets. But Nelson's last-second jumper, shot under intense defensive pressure, was off the mark.

After Turner's driving layup gave Boston a 42-41 lead, the Nuggets scored seven consecutive points over the final 2:19 of the second quarter to take a 48-42 halftime lead. Nelson touched off the spurt with a hook shot.

Celtics: F Kelly Olynyk returned to Boston to have his sprained right ankle examined after sustaining the injury the night before in Boston's win at Portland on Thursday. Stevens said Olynyk will not rejoin the team on the road trip.

Nuggets: C JaVale McGee suited up, but missed his 24th straight game because of a lower left leg strain. However, team officials say he's closing in on a return. McGee missed all but five games last season with a stress fracture in the same area. ... F Danilo Gallinari was back in action after missing four weeks with a meniscus tear in his right knee.