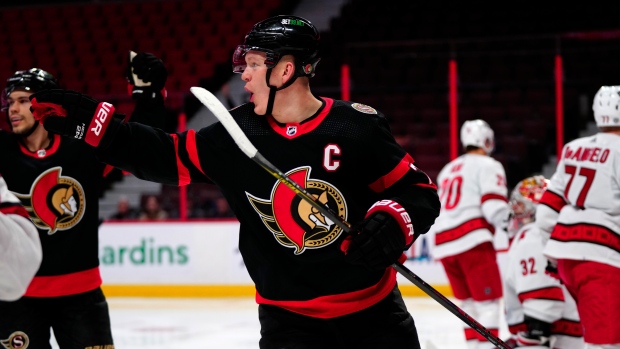 OTTAWA — The Ottawa Senators held off a third period rally by the Carolina Hurricanes Tuesday night to take a 4-3 win led by captain Brady Tkachuk.

Once again the Senators (16-22-4) were the recipients of some solid goaltending as Anton Forsberg stopped 42 shots.

Tuesday’s game was the back half of a back-to-back for both teams as the Senators (16-22-4) were coming off a 4-1 win over New Jersey, while Carolina fell 4-3 in overtime to Toronto.

The Hurricanes got off to a slow start and trailed 4-0 after 40 minutes, but managed to push back in the third.

“It almost looked like we didn't expect to be up 4-0 and a didn't know what to do with it,” said Senators coach D.J. Smith. “We were kind of waiting for their push. We’ve got to learn to just keep doing what we're doing, don’t play the score.”

The Hurricanes are one of the best road teams in the league, but know they can ill afford to spot anyone four goals.

“I thought the fact that we were down 4-0 going into the third, it would be easy just to roll over,” said Hurricanes head coach Rod Brind’Amour. “But that’s not how these guys operate. Really, a pretty good second half of the game. We just gave them too much obviously at the start.”

Tkachuk scored his first in the opening minutes of the game as he was down in the corner and looked to Adam Gaudette out front, but instead the puck went in off Sebastian Aho’s shin.

“It was getting frustrating (not scoring), but I think for those types of things, you’ve just got to work through it, extra work, do what you can and there was plenty of chances throughout that whole drought there,” said Tkachuk. “That first one wouldn't happen if it wasn't for (Gaudette) going to the net there and kind of creating chaos.”

Ottawa made it 2-0 midway through the period as Connor Brown made a nice backhand pass to Formenton in front for his tenth of the season. Four of Formenton’s ten goals are against Carolina.

Tkachuk scored his second of the night as he buried a Stutzle rebound just 40 seconds into the second period on the power play.

Tierney, who hadn’t scored since Nov. 2, made it 4-0 as he forced a turnover and fired a wrist shot past Raanta.

“It felt good,” said Tierney. “When you’re in a drought, it’s a relief to score so you know it’s frustrating when you get chances and they’re not going in so it was nice to finally get one.”

As the Senators expected the Hurricanes rallied back in the third and were able to make it a one-goal game, but were unable to get the equalizer.

Svechnikov got the comeback started early in the third as he dug out a loose puck in front for his 17th of the season.

Smith cut the lead in half at the 13-minute mark as he fired a shot from just inside the blueline and with 1:12 left Trocheck made it a one-goal game beating Forsberg high.

“If we want to be the best team in the world, right from the puck drop you’ve got to have it and you’ve got to play the whole 60 (minutes),” said Smith. “You can’t spot them four (goals) and expect to win the game.”

This report by The Canadian Press was first published Feb. 8, 2022.