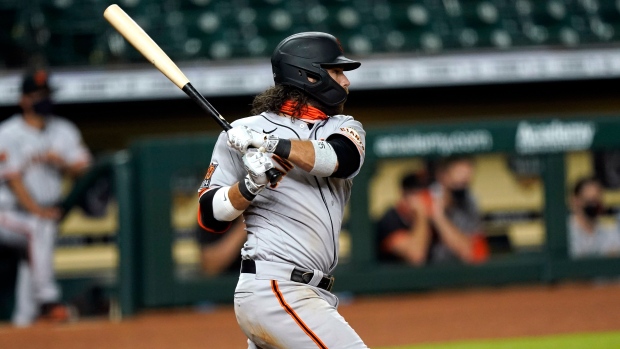 HOUSTON — The San Francisco Giants were confident that Hunter Pence would break out of his slump and get going this season.

The 37-year-old finally did that in grand fashion on Tuesday night, and it helped the Giants rally for 7-6 a win over the Houston Astros in 10 innings.

Brandon Crawford hit an RBI single in the 10th inning to lift San Francisco to the victory. But before that it was Pence, who was mired in a 2 for 32 start, who came through for the Giants.

Houston led by 4 with two outs in the seventh when Pence, who began his career in Houston, hit a three-run pinch-hit homer off Blake Taylor to cut the lead to 6-5. It was the first home run this season for Pence.

“We were all pretty happy for Hunter," manager Gabe Kapler said. “Obviously that changed the game for us and put us right back where we needed to be.”

Pence, who added a single in the ninth, said the Giants showed the identity of their team with Tuesday's comeback.

“That’s kind of been something that we’ve done pretty well here at the start of the season is we’ve been scoring a lot of runs late," he said. “We do have a team mindset of keep fighting, be as scrappy as we can. ... Just having everyone with that mindset, and having good at-bats.”

Austin Slater singled off Cy Sneed (0-3) to start the 10th and send Wilmer Flores to third after he started on second under the new extra-innings rules. Crawford then followed with his grounder to centre field to score Flores.

Trevor Gott (1-0) walked one in a scoreless ninth for the win and Tyler Rogers struck out two in a perfect 10th for his first save.

An RBI single by Darin Ruf off Ryan Pressly with one out in the ninth tied it at 6-all.

Flores also homered for the Giants, who snapped a six-game losing streak to the Astros.

Alex Bregman homered for the Astros as they lost for the sixth time in seven games.

Houston got a win in Monday’s opener after losing five straight, capped by a 7-2 defeat at Oakland on Sunday that was marred by a benches-clearing brawl. Hitting coach Álex Cintrón received a 20-game suspension and a fine on Tuesday for his role in the incident and what MLB said was: “inciting and escalating the conflict between the two clubs.”

Oakland outfielder Ramon Laureano was given a six-game suspension and a fine for charging the Astros dugout toward Cintrón. Laureano is appealing his suspension, but Cintrón accepted his and began serving it Tuesday night.

Houston manager Dusty Baker lamented his bullpen’s inability to close the game out after a solid start by Bielak.

“This is tough, just tough to take," Baker said. “We had the right guys out there at the right time, but we didn’t get the job done."

Flores gave the Giants a 1-0 lead with a homer in the second.

Martín Maldonado doubled with one out in the second to score Kyle Tucker, who had tripled, and tie it at 1-all.

Josh Reddick hit a two RBI double to centre field with two outs that Mike Yastrzemski almost caught, but instead deflected, to make it 3-1.

There were no outs in the third when Bregman sent a fastball from Anderson to left field to extend the lead to 4-1.

Alex Dickerson hit an RBI single to centre field with two outs in the fifth to cut the lead to 4-2.

Myles Straw hit a run-scoring single down the third base line with two outs in the sixth and Jose Altuve followed with a single that sent home another run to make it 6-2.

Giants: 2B/INF Donovan Solano was held out of the lineup as a precaution after he experienced some abdominal soreness following Monday’s game, manager Gabe Kapler said. Solano is batting .458 with a home run and 15 RBIs. Kapler said they’ll evaluate him on Wednesday to see if he can return.

Astros: OF George Springer missed his fifth game with a strained right wrist, but was Houston's runner on second base in the 10th inning. Baker said Springer would likely start on Friday, but could be in the lineup Wednesday.

The Giants have allowed 29 home runs this year, which ranks second in the majors behind Arizona (40). Tuesday was the 15th straight game in which they have allowed a home run, which is the longest streak in franchise history.

Houston's Zack Greinke (0-0, 3.00 ERA) will oppose Trevor Cahill when the series wraps up on Wednesday night. Greinke allowed five hits in six scoreless innings in his last start but did not factor in the decision in a 3-2 loss to the Athletics in 13 innings. Cahill will make his debut after missing time because of a fingernail issue on his right index finger.