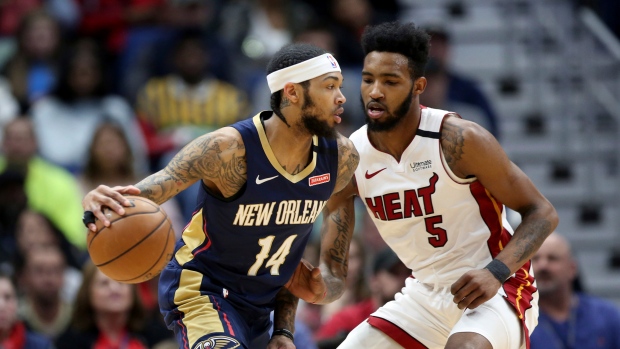 NEW ORLEANS — Brandon Ingram overcame a poor shooting performance that included missing 15 of his first 17 shots by scoring five points in the final 62 seconds to help the New Orleans Pelicans hold off the Miami Heat 110-104 on Friday night.

Mired in perhaps the worst shooting night of his career, Ingram hit a 21-foot jumper and then a 3-pointer from the right wing in a 74-second span in the final three minutes.

“I feel like I went 0 for 20 and then I knocked down those two crucial shots,” said Ingram, who finished with 12 points, admitting it was a challenge to maintain his confidence. “At the same time, you know your teammates are counting on you coming down the stretch. You just got to figure out a way to make it happen.”

The Pelicans, who led by as many as 15 points in the fourth quarter, snapped a three-game losing streak. Miami had its four-game winning streak halted.

While Ingram finished 4-for-20 shooting, Jrue Holiday led the Pelicans with 20 points, and Josh Hart came off the bench to finish with 19 points and 12 rebounds.

Pelicans coach Alvin Gentry said he had no hesitation going to Ingram in the closing minutes.

“He didn’t shoot a great percentage, but it doesn’t matter if you make the big shots down the stretch,” Gentry said. “He had a lot of shots that were questionable from a foul standpoint. He just continued to play, and when we needed him most, he came up with two big scores.”

Miami got a game-high 26 points from Jimmy Butler and 24 from rookie Duncan Robinson, who had eight 3-pointers.

With the eight 3s, Robinson has made 233 3-pointers this season, the most by an undrafted player during a single season in NBA history.

New Orleans led 93-79 when Williamson slammed home a dunk off a feed from Holiday, but the Heat scored 10 straight, including a pair of 3-pointers by Robinson to claw back within 93-89 with 6:14 left. The Pelicans went eight possessions without a point.

The Heat moved within 97-96 with 3:53 left on a finger roll by Derrick Jones Jr. that came after a steal by Butler. When Robinson hit his fourth 3-pointer of the quarter, Miami was within 100-99 with 3:12 left.

The Pelicans took a 65-51 halftime lead despite a 1 for 9 offensive performance by Ingram. Playing on his 25th birthday, Hart made up for Ingram’s slow start, coming off the bench to score 12 points and grab nine rebounds in just 11 first-half minutes.

Williamson had 11 points in the first half, including a leaping catch off the glass of a wild pass by Holiday that he softly cradled and put into the basket. That was part of an 18-5 New Orleans run.

Butler kept the Heat within striking distance with 15 first-half points.

“We just clearly weren’t sharp,” Miami coach Erik Spoelstra said. “We were playing from a hole and then we weren’t able to get over the hump.”

Alvin Gentry said he can understand why the NBA might be considering playing games with no spectators in the arena if the fallout from the coronavirus epidemic gets worse. “I’ll give you an example — I went five places today to buy hand sanitizer, and there’s none in the whole town, really,” he said. “I think people are scared. It wouldn’t surprise me if that did happen. … it’s one of those situations where we all got to be careful.”

Heat: F Jae Crowder took an elbow to the jaw from Zion Williamson in the first half and missed the rest of the game. … Rookie G Tyler Herro missed the game with right ankle soreness. … Backup C Meyers Leonard sat out with a sprained left ankle.

Pelicans: No. 1 pick Zion Williamson’s 13-game streak of scoring at least 20 points was snapped. … The Pelicans had lost four of five coming in, but now face a four-game road trip (Minnesota, Sacramento, Utah and the LA Clippers). … Alvin Gentry won his first challenge of the season when he stopped the clock and the refs agreed that Bam Adebayo struck Derrick Favours in the jaw on his way to layup. A potential 3-point play was nullified. “It was a good feeling,” Gentry said. “It took 66 games to get it. That one was pretty obvious. If we had lost that one, I was not going to challenge any more the rest of the year.”