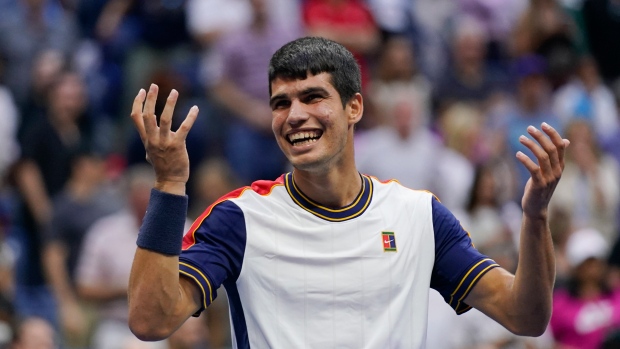 MILAN (AP) — Americans Brandon Nakashima and Sebastian Korda and favorite Carlos Alcaraz of Spain all won on the opening day of the Next Gen Finals on Tuesday.

Alcaraz took just 75 minutes to beat Holger Rune of Denmark 4-3 (6), 4-2, 4-0, seeing out the group match with a crosscourt volley to take the final game and set to love.

The 18-year-old Alcaraz has moved more than 100 places up the rankings this season to No. 32 and reached the U.S. Open quarterfinals.

“I was really nervous at the beginning, but I tried to be calm,” Alcaraz said. “To do many different things on court is very important. I am trying to go to the net and play aggressively in the important moments and stay calm. I am trying to do this every match.”

The eight-man tournament for the top 21-and-under players on the ATP Tour has a round-robin format. Also in Group A, Nakashima took less than 90 minutes to beat Francisco Cerúndolo of Argentina 4-1, 3-4 (3), 4-1, 4-0.

Nakashima, ranked 63rd in the world, broke serve four times and won when the 91st-ranked Cerúndolo returned a serve into the net.

Korda saved a match point with an ace to take the third set to a tiebreak, where he also had to rally from 3-1 down.

“It definitely wasn't easy,” Korda said. “I just kept a cool head, told myself to keep going and it worked out really well.”

It is the fourth edition of the tournament in Milan. It was canceled last year because of the coronavirus pandemic. The ATP Finals will also be in Italy, in Turin next week.

There are different rules at the Next Gen Finals, including on-court coaching, no-Ad scoring, medical timeout limits, and Hawk-Eye making all the line calls.

The most drastic change is the shorter set, where the first to four games takes the set, with a tiebreak at 3-3.

This year there are also shorter warm-ups, ensuring matches begin just one minute after the players enter the court, while bathroom breaks are timed to three minutes.