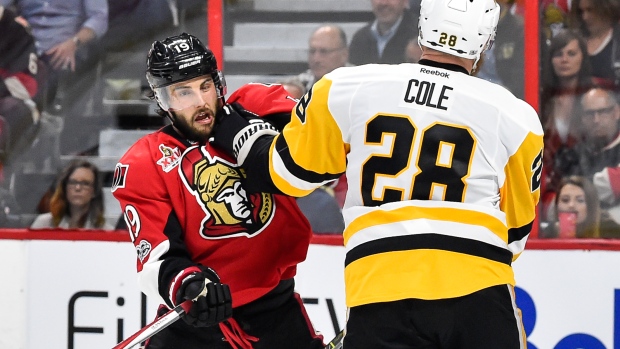 Ottawa Senators forward Derrick Brassard is set to undergo surgery on a torn labrum and will need four to five months to recover, general manager Pierre Dorion confirmed to In the Box on TSN Radio 1200 on Tuesday.

#Sens GM Pierre Dorion tells us In The Box that Derick Brassard has a torn labrum that will require surgery. 4-5 months recovery time.

Brassard had been dealing with the shoulder injury throughout the playoffs, however the 29-year-old didn’t miss any significant time. He played in all 19 games during the Sens post-season run and only sat out the third period of Game 5 against the Penguins in the Eastern Conference final. He tallied four goals and 11 points in the playoffs.

Dorion: Derick Brassard will require should surgery, out 4-5 months

Steve and Todd are joined by Ottawa Senators GM Pierre Dorion to recap the season, they look ahead to the expansion draft and the signing of Christian Jaros.

The recovery time puts Brassard in danger of missing the opening of the regular season and possibly up to the opening month of games.

Brassard was acquired by the Sens last offseason in a trade that sent Mika Zibanejad to the New York Rangers. He currently has two years remaining on a five-year, $25 million deal.

The Hull, Quebec native struggled in his first season with the Sens, tallying just 14 goals and 39 points in 81 games.

Dorion also revealed to TSN 1200 that the team would not issue a qualifying offer to Jyrki Jokipakka, who is scheduled to become a restricted free agent. Instead, the defenceman will head to Europe.

Jokipakka dressed in only three regular season games and no playoff games after being acquired ahead of the trade deadline in the deal which sent Curtis Lazar to the Flames.