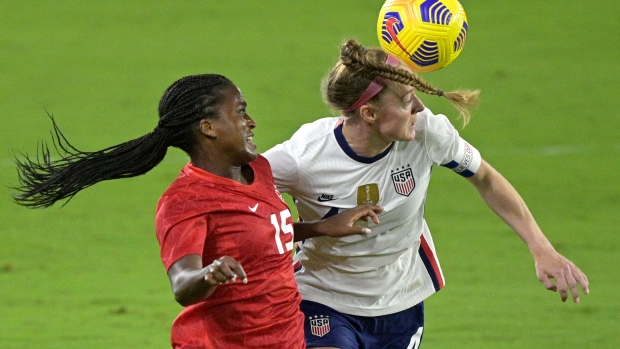 In the team’s first match in 345 days, Canada’s women’s soccer team almost ended a streak 20 years in the making.

Canada lost 1-0 to the United States in the team’s opening match of the SheBelieves Cup in Orlando Thursday night. Rose Lavelle scored in the 79th minute to seal the win for the Americans.

“For an opening game for a new coach coming in, you want players to put everything out on the field, and I’m really proud, I think they did that,” said Bev Priestman, who was making her debut as Canada’s head coach.  “The mindset was right, first and foremost. They were brave, they worked really, really hard.  They took it to the U.S. in moments in that game.”

It’s a case of glass half-full versus half-empty. On the one hand, the Canadians haven’t won a game against the Americans since March 2001, and now fall to 3-51-7 all-time against the top-ranked team in the world. But Canada, facing numerous hurdles, had several chances and easily could have tied or even beaten their rivals.

The Canadians, ranked eighth in the world, last played on March 10, 2020 – a 2-2 draw against Brazil at the Tournoi de France. Restrictions surrounding COVID-19 have kept Canada off the pitch since then, while the U.S. has been able to play in a few friendlies over the past several months.

The Canadians were also without several of their top players, including Christine Sinclair and Diana Matheson (both injured), as well as Kadeisha Buchanan, Ashley Lawrence, and Jordyn Huitema (all not released by their respective clubs in France).

“Perhaps they underestimated what we could bring with some of the key players we were missing today,” said Desiree Scott. “I’m very impressed with the showing that we performed out on the pitch today. I don’t think anyone should take Canada lightly. This is a great stepping stone for us moving forward and for the rest of this tournament.”

Janine Beckie had arguably the best opportunity of the first half in the 38th minute, when a shot from Nichelle Prince deflected right to her in the box. Beckie connected on the volley, but her shot went straight at American goalkeeper Alyssa Naeher at the near post.

Beckie – who is a dual Canadian/American citizen – had another glorious chance in the 53rd minute. After a miscommunication between American defenders Crystal Dunn and Becky Sauerbrunn, Prince had a clear break on goal. She selflessly set up an open Beckie, who had time to take a touch, but she once again fired it right at Naeher.

“We should have put our chances away.  But by the time the Olympics come, I think we will,” said Priestman.

That was followed by some controversy in the 73rd minute. With Allysha Chapman pressing down the left wing, her cross attempt clearly struck the hand of defender Midge Purce. Despite protests from the Canadian players, the official let play go on, and there is no VAR (Video Assistant Referee) at this tournament.

“For me, it was a handball,” said Priestman.  “But we’re never going to get every decision.  We can’t rely on winning games from decisions.”

Canada had one last chance to tie the game in stoppage time when centreback Shelina Zadorsky connected on a corner kick, but her header just missed the far post.

The Canadians haven’t beaten a top-10 opponent in their last nine matches, since defeating England 1-0 in a friendly in April 2019.

It was an unfortunate start for Canada, with the team receiving a blow very early into the match.

Kailen Sheridan had earned the start and her 10th cap, but in the ninth minute she pulled up lame after playing the ball and was soon subbed out, with Stephanie Labbé coming on to replace her. Priestman didn’t have an update for Sheridan following the match.

This was Sheridan’s first opportunity to play against the U.S. While she has had a couple of matches against top-tier teams like France and Germany, most of her starts have come against opponents ranked below Canada.

Sheridan has been a rising star in the NWSL over the past several years. She was named a finalist for Goalkeeper of the Year in 2019, and last year she won the Golden Glove at the NWSL Challenge Cup. She is expected to challenge Labbé for Canada’s starting position in net.

In her place, Labbé performed very admirably, especially in the first half. She made a great reaction save on Lynn Williams in the 35th minute, which was followed by another stop on Williams on a clean strike in the 39th minute. Early in the second half, Labbé got to the ground quickly to get a hand on a shot from Carli Lloyd.

“I thought [Labbé] was outstanding.  She showed her experience, leadership in a moment where for a goalkeeper, it’s hard to come into a game against the U.S. I thought she was absolutely outstanding, led form the back well, and made some great saves,” said Priestman.

Vanessa Gilles earned her third cap with the national team and her second-ever start. She was arguably Canada’s player of the match and proved to be a strong partner with Zadorsky at centreback. Gilles was key on defence on several American corners, winning the battles in the air to clear away the danger, and she also had a few opportunities on offence on Canadian corners.

“I thought Vanessa had an unbelievable performance. We’ve seen that throughout the camp. I’ve said in these moments when you’re missing some core players, players have to step up, and they’ll do things you don’t know they’ve got. I think Vanessa absolutely did that. Shelina, that partnership, worked really well,” said Priestman.

Forward Evelyne Viens earned her first-ever cap for Canada when she entered the game in the 60th minute. This is Viens’s first international experience at any level. Known as a scorer, Viens has eight goals in six matches for Paris FC (on loan from SkyBlue FC), though unfortunately she wasn’t afforded many touches in Thursday’s match.

“Evelyne, what I’ve seen in camp is she can find the back of the net. We need to find more forwards beyond Sinc who can do that in that 9 role,” said Priestman. “I think she worked hard in the game, did everything for the team, which is first and foremost what we ask of her. Moving forward, there’s more to see from Evelyne, for sure.”

Scott wore the captain’s armband in Sinclair’s absence. This was her 157th appearance for Canada, 79 more than the next closest among the starters (Jessie Fleming with 78).

“Always tough shoes to fill when a Christine Sinclair is missing, but an honour to be selected and help lead this team through this tournament,” said Scott.

Sophie Schmidt was subbed on in the 55th minute, earning her 200th cap for Canada. She is the third player to record 200 caps for the national team, joining Sinclair and Matheson.

Canada’s next game is Sunday against Argentina, who lost 4-1 to South American rival Brazil earlier on Thursday.