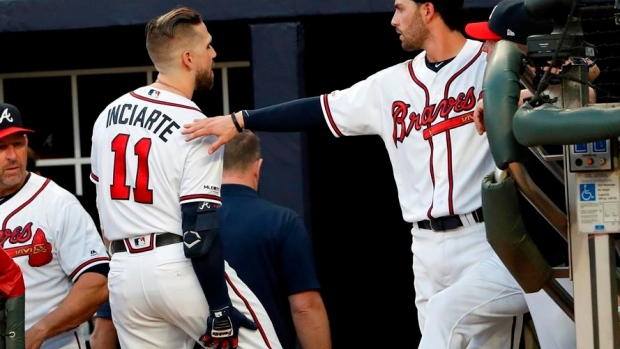 ATLANTA — Braves centre fielder Ender Inciarte says he will miss four to six weeks after straining his right hamstring while running the bases in Friday's game.

It's the second serious injury this year for Inciarte, who returned July 27 from a lumbar strain that sidelined him for 55 games. He hopes to return before the end of the regular season and be ready for the post-season.

Atlanta began Saturday's game against the Los Angeles Dodgers with a 4 1/2-game lead in the NL East.

"We're still going to play in October, and I want to be a part of that," Inciarte said. "It's just bad timing, but you've got to try and think positive. ... I just wanted to stay with the team and keep playing."

The Braves recalled Adam Duvall after a one-day trip to Triple-A Gwinnett to take Inciarte's spot on the roster. Ronald Acuña Jr. started in centre field Saturday with Duvall starting in left.

Inciarte is the latest everyday player to get hurt in Atlanta. Right fielder Nick Markakis is out until mid-September, left fielder Austin Riley until the end of August and shortstop Dansby Swanson for another week or so.

"That's the frustrating part of the game," Inciarte said. "We have to get back to work and do everything we can to do in the training room and get back to playing games."

Inciarte missed time with hamstring injuries in 2015 and '16.

"I was in pain but I knew I didn't tear it," Inciarte said. "My frustration was just knowing I was going to miss time again."