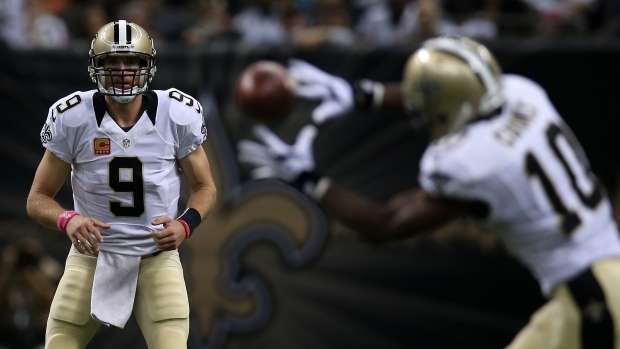 NEW ORLEANS - As Drew Brees watched Saints teammate Zach Hocker clank a potential winning field goal off the upright before a stunned Superdome crowd, the veteran quarterback began trying to convince himself that he was simply meant to throw his 400th career touchdown pass in overtime.

Chalk one up for the power of positive thinking.

Brees hit C.J. Spiller with a short pass that the running back turned into an 80-yard touchdown on the second play of overtime and New Orleans won for the first time this season, 26-20 over the injury-decimated Cowboys on Sunday night.

"Right when the play call came out of (coach) Sean Payton's mouth for C.J., I thought, 'This is it. This is going the distance," Brees recalled. "I thought it was great for our team to have to recharge and immediately snap back into what we were going to need to do to win the game.

"That's how a team grows," the quarterback continued, adding, "Man, it makes for an exciting locker room afterward."

Brees, who missed New Orleans' previous game because of a bruised rotator cuff in his right (throwing) shoulder, completed 33 of 41 throws for 359 yards and two TDs in his return.

He is now the fifth quarterback in NFL history to throw 400 touchdown passes; he did it in 205 games, faster than the other four.

Mark Ingram gained 128 yards from scrimmage on a combination of runs and short passes. Josh Hill caught a 3-yard touchdown pass for New Orleans (1-3) and Khiry Robinson had a 1-yard touchdown run in the fourth quarter.

Dallas quarterback Brandon Weeden, filling in while Tony Romo recovers from a broken clavicle, came through with 91-yard touchdown drive to tie the game in the final minutes of regulation, only to lose his 10th straight start overall, tying him with Blaine Gabbert for the longest such streak among active QBs.

The tying touchdown was as clutch as it gets — a 17-yard pass to Terrance Williams on fourth down with less than 2 minutes left.

Brees then quickly marched New Orleans into what should have been easy field goal range, only to have the celebration delayed when Hocker, a first-year kicker who had hit from 51 yards earlier, hit the left upright from 30 yards out, crouching in agony afterward.

"It's unacceptable, but (I'm) thankful those guys have my back out there," Hocker said. "Next time I'm going to get it."

New Orleans won the toss and took the ball first. Two plays later, the game was over on the first TD of the season by Spiller, who was signed as a free agent last off-season.

"I knew nobody was going to catch him," Brees said.

Dallas safety Barry Church had the best chance to make a game-saving tackle, but was no match for Spiller's speed.

"We were in man-to-man coverage, and Brees saw that from the jump and saw we had a linebacker on Spiller," Church said. "He laid the ball up there perfectly for him. I tried to get over the top to help him out, but he was down the sideline."

Joseph Randle had a 1-yard TD run for Dallas (2-2), which failed to win what would have been an 11th-straight regular season road game. But even with New Orleans struggling, winning in the Superdome was going to be a tall order for a Cowboys squad riddled with injuries.

On top of that, linebacker Sean Lee left in the first half with a concussion. Then, Lance Dunbar, who rushed for 54 yards in the first half, had to be helped off the field with a knee injury after returning the kickoff to open the second half.

"When you lose your two franchise players like Tony and Dez, it's tough, but that's what happens in this league," said tight end Jason Witten, who had four catches for 57 yards. "You have to regroup. This team doesn't make excuses, and we'll get back at it."

By contrast, the Saints benefited not only from having Brees back, but also cornerback Keenan Lewis (hip), safety Jairus Byrd (knee) and linebacker Dannell Ellerbe (toe) in the lineup for the first time this season.

NOTES: Before his missed field goal, Hocker not only made a pair of field-goal attempts, but also hit a clutch 43-yard punt to the Dallas 9 in the fourth quarter while filling in for regular punter Thomas Morstead, who was icing an apparent quad injury. ... Dallas coach Jason Garrett said Dunbar's knee injury appeared serious.