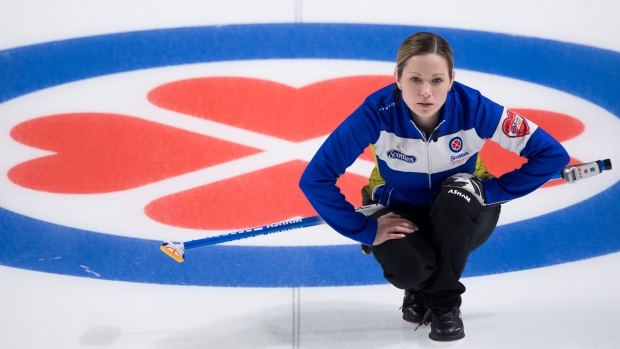 The long wait to learn who will represent Alberta at the national curling championships is over. The decision provided some clarity on the wild-card front too.

Walker, ranked seventh in Canada, was expected to get the nod for the Scotties Tournament of Hearts. However, the selection of the fourth-ranked Bottcher for the Tim Hortons Brier was tougher to predict.

Sixth-ranked Kevin Koe and 15th-ranked Jeremy Harty also had a case. Koe didn't play in the last Alberta playdowns since he had a Brier entry as Team Canada, while Harty is the provincial standings leader.

"This was an extremely difficult decision for Curling Alberta’s board of directors,” Curling Alberta president Steven Young said in a release. "As a province, we were faced with a unique set of circumstances in unprecedented times.

"No one could predict that we would be forced to make a decision like this, which we tried to avoid by pushing hard to host our championships."

Koe will instead get one of the two wild-card spots based on the final 2019-20 domestic rankings. Fifth-ranked Mike McEwen of Manitoba gets the other.

"My disappointment level really isn't that high," said Team Koe lead Ben Hebert. "If we knew that this was the make-or-break (decision) of whether or not we were going to be in (the Brier), obviously my tune would change.

"I'm pretty grateful that we still get to compete regardless and that Curling Canada is putting on this bubble for us."

Harty could still be considered for the third wild-card spot in the 18-team Brier field. The national federation will make that decision once all member associations either complete playdowns or name representatives.

The Feb. 19-28 Scotties will kick off a run of six straight competitions in a so-called bubble at Calgary's Markin MacPhail Centre.

"We're excited to wear the Alberta colours and the Alberta jackets," Walker said. "It's obviously not the same as when we won the honour to go but we definitely feel honoured to have been asked."

Reigning champion Andrea Crawford has been invited to represent the province again. The New Brunswick men's tankard, meanwhile, is still on the schedule for Feb. 10-14.

Bottcher, the Canadian No. 4, reached the Brier final last year but lost to Brad Gushue of Newfoundland and Labrador. The 2021 Brier is set for March 5-14.

Ninth-ranked Glenn Howard of Ontario appears to be a good bet for the final wild-card spot, although other teams may be considered.

On the women's side, two Alberta skips — No. 5 Chelsea Carey and No. 6 Kelsey Rocque — are ahead of Walker in the women's rankings. But Carey is a free agent and Rocque only has two returning players from last season's team, one short of the required minimum.

Manitoba's Tracy Fleury is a wild-card lock at No. 2. The other two women's berths will be filled over the coming weeks.

Suzanne Birt is a heavy favourite to win the two-team Prince Edward Island championship at the end of the month, but a loss would move her into a wild-card spot at No. 9.

World junior champion Mackenzie Zacharias is in the mix at No. 11 along with fellow Manitoban Beth Peterson at No. 12.

It's possible that Rocque and 10th-ranked Robyn Silvernagle of Saskatchewan - who also has two returning members - could be in play for the third wild-card spot.

A Curling Canada spokesman said the 3-of-4 rule applies to the first two wild-card teams in each gender, but added that qualifying criteria for the third wild-card team won't be finalized until after all member associations have declared teams.

This report by The Canadian Press was first published Jan. 18, 2021.