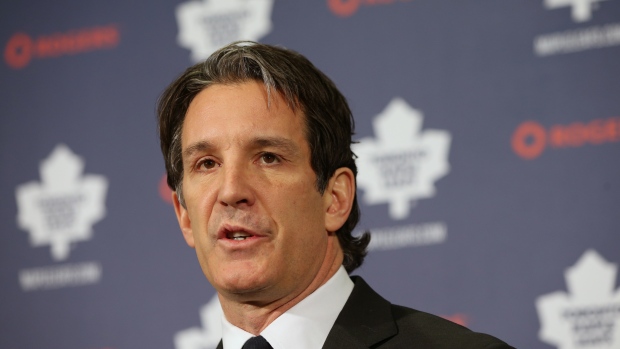 PEBBLE BEACH, Calif. — For the first time on Tuesday, Toronto Maple Leafs president Brendan Shanahan addressed stories that came to light about coach Mike Babcock and players Mitch Marner and Johan Franzen in the wake of Babcock’s firing from the Leafs on Nov. 20.

Shanahan said “much was made” of the incident with Babcock and Marner, in which the former Leafs coach reportedly asked the 19-year-old rookie to rank his teammates in order of their work ethic.

Shanahan said he was notified “right away” and spoke to Babcock about it.

“I addressed it right away with Mike,” Shanahan said. “Mike apologized to Mitch. There was communication with our general manager at the time and the agent and the family. You know, it wasn’t something that was appropriate or acceptable to us.

“Since then, my general manager – whether it was Lou [Lamoriello] or Kyle [Dubas] – have never come to us with a situation like that.”

With the stories that have surfaced about Babcock’s coaching style in recent weeks, Shanahan stressed that it would be “dangerous” to link Babcock to the other coaching changes that have taken place in Calgary, with Bill Peters, and Jim Montgomery in Dallas.

“I think you have to look at each specific case on its own and it’s a little bit unfair to just sort of group everybody all in one,” Shanahan said.

Shanahan was also asked about Babcock’s relationship with Franzen, who called Babcock the “worst person I have ever met” in a Swedish newspaper on Dec. 2.

Franzen alleged that Babcock was a “bully” who “attacked” him daily. Babcock didn’t respond to a request for comment about the allegation.

Shanahan and Franzen both played under Babcock in Detroit during the 2005-06 season. Shanahan then, of course, hired Babcock to coach the Maple Leafs in 2015.

Shanahan said he spent time with Franzen a couple years ago during a game in Detroit and “it never came up.”

“But I don’t dispute for a second that Johan is telling an experience that did in fact happen,” Shanahan said. “He and I and many others come from a generation where we didn’t speak about that stuff immediately, and now, I think that players are choosing to speak up more often and I applaud him for having the courage to do that.

When asked what he would say to a team if they called and inquired about hiring Babcock in the future, Shanahan declined to answer.

“I think that’s sort of a hypothetical that I wouldn’t want to get into,” he said.

As the Board of Governors meetings wrapped, Shanahan said it's clear that the way today’s player is coached is changing - and he said that is for the better.

“Listen, I think you can take a player out of his comfort zone. I think that you can push a player beyond what he thinks he is capable of and still ask yourself the question at the end of the day, ‘Have I done this in an appropriate way?’,” Shanahan said. “It’s not always going to be a good day. At the end of the day, you want to get the most out of the players, and I think that what the players are saying now is there is a more positive way in which that can be approached.”