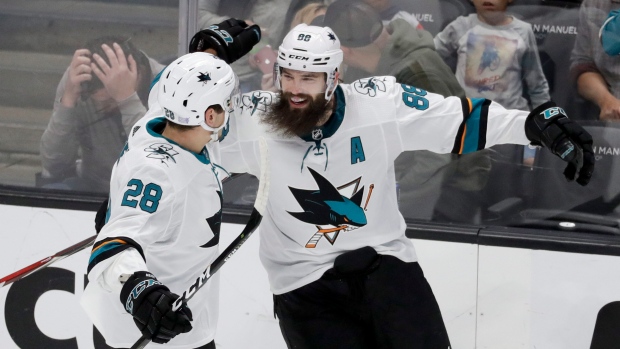 After the star centre a third-period blow to the right knee, his status remains unclear.

Brent Burns scored on the power play and Evander Kane had a short-handed goal in the third period, and the Sharks beat the Anaheim Ducks 5-3 Thursday night for their fifth straight win. Logan Couture also scored ate in the game.

Hertl went to the bench after a hit from Sam Steel and never returned. Coach Peter DeBoer had no update, and Hertl wasn’t around postgame to clarify his status.

Couture was under the impression Hertl would be fine.

“I talked to him and he said he’s going to be good,” he said. “So positive. … Anything to the knee doesn’t look good, but from what I’ve heard he’s OK.”

Rickard Rakell, Jakob Silfverberg and Max Jones scored goals for the Ducks, who stumbled to a 2-3-2 record on a season-long seven game homestand. The Ducks opened the season 6-1-0 at home.

“I don’t care if you’re at home or on the road, man, every point that slips out of our hand is a missed opportunity,” Ducks coach Dallas Eakins said. “It’s just like getting a firm kick. But we will try to build off the positives, and in the places we can get better, we will try to correct that and get ready for the road.”

Burns’ go-ahead goal came on a rush at 8:05 of the third as he took the puck up the middle and fired a shot from the slot past John Gibson for his fifth of the season.

Kane delivered his 12th of the season just over two minutes later for a 4-2 lead. He broke free with Couture on a 2-on-1, getting just enough on a deflection to slide the puck past Gibson. Kane added an assist on Burns’ goal, the 200th assist of his career.

“I thought in the third we found another level,” DeBoer said. “Our entire team, we talked between the second and third (periods) that we had an opportunity to win this game if we got more guys going. I thought our third was our best period.”

Jones scored for the Ducks with just over four minutes remaining, his second of the season.

The teams traded goals in each of the first two periods.

The Ducks took a 1-0 lead 1:09 into the game when Rakell picked up a loose puck after Silfverberg forced a turnover and scored to the top left of the goal past goalie Martin Jones. It was Rakell’s sixth goal of the season.

The Sharks evened the score at 6:44 of the opening period on a goal that had to be confirmed by replay. Hertl pounded on a rebound after a Barclay Goodrow shot and jammed the puck past Gibson’s pad. The Ducks did not challenge that Hertl interfered with Gibson.

The Ducks took the lead again at 13:00 of the second period when Silfverberg cleaned up a loose puck in front of the goal and pushed it through the legs Jones for his ninth of the season. Rakell took a shot from the right point with both Silfverberg and Adam Henrique pouncing on the rebound.

The Sharks made it 2-2 at 18:28 of the second period when Hertl took a pass from Timo Meier fired a quick shot to the upper left of the goal past Gibson. It was Hertl’s 10th goal of the season.

NOTES: There was a moment of silence before the game for the victims of the school shooting earlier Thursday at Saugus High School in neighbouring Los Angeles County. ... The Ducks hosted the 1,000th home game in franchise history. They are 537-330-133 all-time at home. ... The Sharks’ game at Anaheim was their first of four one-game trips in a span of 17 days with away-and-back visits to Vegas (Nov. 21), Los Angeles (Nov 25) and Arizona (Nov. 30) to come. ... San Jose D Erik Karlsson played in his 699th career game.

Ducks: Anaheim will hit the road for the first time in 2 1/2 weeks when it plays at St. Louis on Saturday.