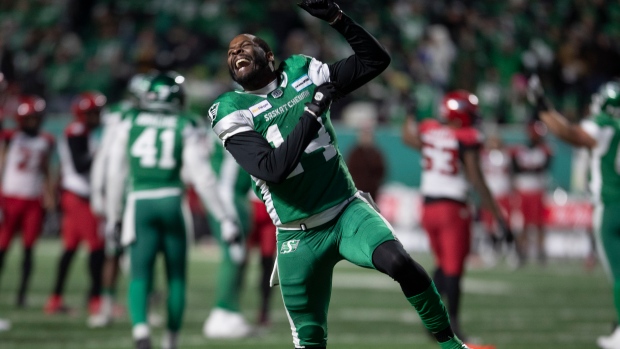 REGINA — The latest highlight in Brett Lauther’s career was a surreal moment for the Saskatchewan Roughriders kicker.

Lauther’s 34-yard field goal in the second overtime mini game lifted the Riders to a 33-30 victory over the Calgary Stampeders in the CFL’s West semifinal Sunday in Regina.

Both teams kicked field goals in their initial overtime possessions to make the score 30-30.

Calgary had the ball first in the second overtime and kicker Rene Paredes missed a 44-yard field goal, giving the Riders the opportunity to win the game on their possession.

After Lauther’s kick went through the uprights, focus shifted to a penalty flag in the Winnipeg backfield. Had the penalty gone against the Riders, Lauther would’ve been forced into a second attempt after sprinting down the field following his initial attempt.

The field goal stood as Calgary was penalized for rough play.

“I did a double take to make sure it actually did go in and then after that I saw the flag, I was just like, there's no way it's on us,” said Lauther, who connected on four-of-five field goal attempts. ”I was just hoping that we didn't really have to redo it but I was also just trying to stop my heart rate for a second in case I had to go back up there.”

“I’ve got all the trust in the world that 'Money' Lauther is going make a play for us," said Fajardo. "He's one of those guys that felt like he got snubbed as an all-star as well and went out there and performed a clutch kick for us.

"I told the guys in the huddle, we're going run the ball twice, Brett's going to come in and kick the game-winning field goal and we're all going to be excited about it. That's exactly what happened.”

Lauther, in his third season with the Riders, admitted this was a milestone game in his career but his main concern was helping the Riders get to the next level after recent playoff setbacks.

“I feel like it definitely is up there. I mean, it's playoffs,” said Lauther. “We've been winning in the regular season but we haven't got the job done in playoffs and especially at home. I don't think anyone's had more home playoff games in the last couple years and had more regular season wins. I wanted to right some wrongs and get a win.

“I don't even care about that I take the game-winner or whatever. I just wanted to win this game so bad for the fans and the coaches and the whole organization from top to bottom, like this province deserves so much.”

Paredes forced overtime when he connected on a 47-yard field goal with 59 seconds left in regulation time. He hit 44-of-48 field-goal attempts in the regular season but struggled Sunday, converting five of his eight field-goal attempts.

“He made a couple of clutch ones late, some deep bombs... I'll go to bat with him every game,” said Dickenson. “You know, they weren't gimmes.”

While the game had an exciting ending, it was a sloppy effort at times with the teams combining for eight turnovers, six of which came in the first half.

Fajardo was intercepted four times while Bo Levi Mitchell was picked off twice. The Stampeders also turned the ball over once on downs and lost one fumble.

Fajardo was incredulous about the Riders being able to win despite his four interceptions.

“If you had told me going in this game that I’d four picks and we would have won, I would have told you you're psychotic,” said Fajardo.

Fajardo went 22 of 33 for 189 yards with one touchdown and four interceptions. His biggest contribution was with his legs, as he gained 89 yards on 10 carries.

Mitchell was 26 of 36 for 285 yards and two interceptions. Tailback Ka’Deem Carey had a strong game, gaining 117 yards on 22 carries while scoring two touchdowns for Calgary.

Jamal Morrow had an impressive game returning kicks for the Riders. In the first half Morrow returned a missed field goal for a touchdown that was nullified by a penalty. Paredes was wide left with the attempt, which Morrow fielded deep in the end zone. After juking past a defender at the goal line, Morrow found a seam up the sideline and scored untouched on a 124-yard run.

Morrow did get on the scoresheet in the second quarter on an electrifying punt return. Fielding the ball on the Saskatchewan 41-yard line, Morrow cut to the wide side of the field and went untouched down the sideline for a 69-yard touchdown.