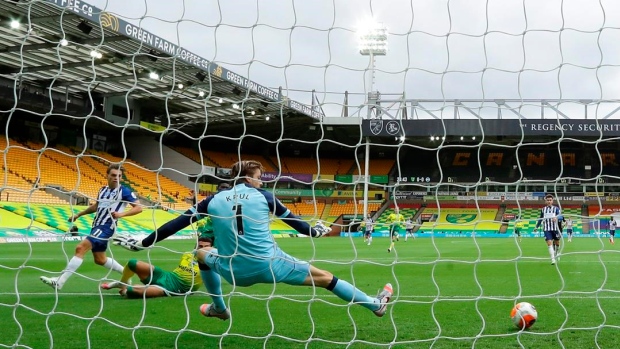 NORWICH, England — Brighton moved to the brink of safety in the Premier League and left last-place Norwich closer to relegation after winning 1-0 at Carrow Road on Saturday.

Leandro Trossard's goal in the 25th minute was enough to earn Brighton its second victory in four matches since the restart of the league and push the team nine points clear of the relegation zone.

Norwich stayed seven points from safety with just five matches remaining and looked consigned to the drop after one season back in the top flight.

Since the resumption, Norwich has lost four straight league games and also been eliminated from the FA Cup at the quarterfinal stage.

Substitute Adam Idah struck the post with a header in second-half stoppage time, the closest Norwich came to an equalizer inside its empty stadium.