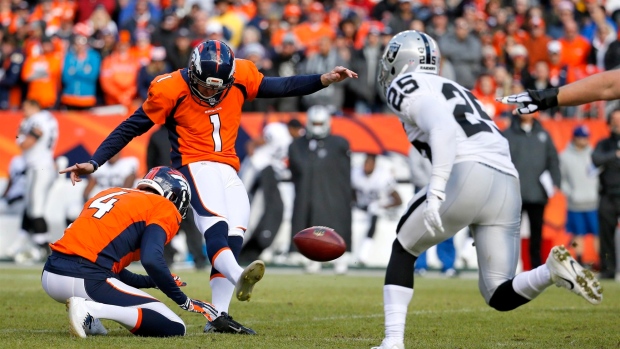 ENGLEWOOD, Colo. - The load taken off Brandon McManus's shoulders was replaced by a heavy heart.

It was a reversal from last season, when Barth supplanted an inconsistent McManus, who was later re-signed as a kickoff specialist.

"He was on the team last year with me, so we do have a bond and a friendship with one another. It's tough to see that," McManus said. "But it was exciting for me to get that trust back and to win this job back."

McManus wasn't in a celebratory mood, so "it wasn't an easy day to kick," he said.

Still, he hit all 12 of his field goal attempts.

McManus made the roster last year while Matt Prater was serving a suspension, and he kept the job when Prater was released and then signed with Detroit. But after going 9-for-13 on field goals, the Broncos brought in Barth.

Barth made 15 of 16 field goals over the final five weeks last season but was doomed by his poor kickoffs this preseason, one of which was returned 103 yards for a touchdown.

"It's us showing confidence in him and it's up to him in turn to do his job and do a great job," Kubiak said.

A career 85 per cent field goal kicker in seven NFL seasons, Barth was chosen the AFC's special teams player of the month last December after going 5-for-5 against Kansas City and San Diego. But after failing to place any of his eight kickoffs in the end zone on a cold night in Kansas City, the Broncos quickly re-signed McManus as a kickoff specialist.

With Barth handling field goals, McManus focused on eliminating his jab-step to improve his accuracy, something he continued to work on in the off-season along with adding directional kickoffs to his repertoire.

Throughout the summer, he and Barth were pretty much even until McManus nailed a 70-yard field goal during a 2-minute drill at practice last week.

"I don't know if it's my personality or my mental strength, but I never lost confidence in myself," McManus said. "I knew what I was capable of doing and I just had to come out here and prove it to not only myself but to the team, my teammates, who see me in the locker room every day, to Coach Kubiak and to the office upstairs that I was the right kicker to keep."