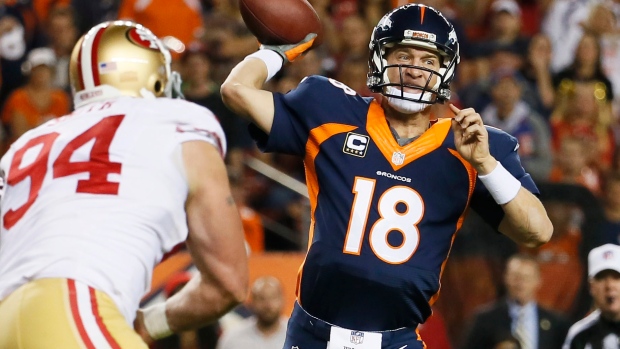 Manning was named the top offensive player after his record-setting performance in Sunday night's 42-17 win over San Francisco. He surpassed Brett Favre's record of 508 career touchdown passes and now has 510 after throwing for four scores while completing 22-of-26 throws for 318 yards.

In addition, he extended NFL career records with his 87th 300-yard game and 33rd four-TD effort. It was his 27th career weekly award, the most of any player since it was instituted in 1984.

Smith picked up the defensive award thanks to four tackles, an interception and a sack-fumble in Jacksonville's first win of the season, a 24-6 triumph over the Cleveland Browns. His sack-fumble led to a field and goal and his first interception set up a touchdown.

Jones was given the special teams nod after his block of a 58-yard field goal attempt on the final play of the game allowed the Patriots to complete a 27-25 win over the New York Jets.

Other offensive candidates included Jacksonville running back Denard Robinson, who ran for 127 yards with a touchdown in the win over the Browns; Miami quarterback Ryan Tannehill, who completed his first 14 passes en route to a 25-of-32 performance for 277 yards with two scores in a 27-14 win over Chicago; and Buffalo receiver Sammy Watkins, who had nine catches for 122 yards and two touchdowns in a 17-16 victory over Minnesota.

Defensive consideration went to Baltimore linebacker Daryl Smith, who had 13 tackles in a 29-7 win over Atlanta; and Denver's DeMarcus Ware, who had four tackles and three sacks in the victory over San Francisco.

Kansas City kicker Cairo Santos was also nominated for the special teams award after connecting on all three of his field goal attempts, including a 48-yard kick with 21 seconds remaining in the fourth quarter that lifted the Chiefs to a 23-20 win over San Diego.