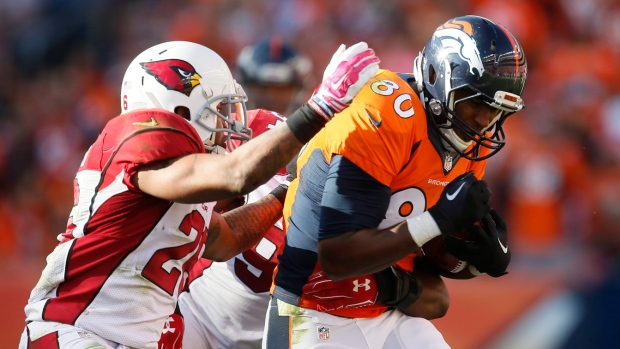 Englewood, CO - Denver Broncos tight end Julius Thomas was listed as a non-participant in practice for a third straight day on Friday, leaving his status uncertain for this weekend's game against the Miami Dolphins.

Thomas, the NFL's leader with 12 touchdown catches this season, did take part in a few individual drills during Friday's session, according to the Broncos' website. The team officially declared the 2013 Pro Bowl selection questionable for Sunday's contest.

Thomas sprained his left ankle in the first quarter of last week's 22-7 loss at St. Louis and did not return to the game.

The news was considerably better in regards to wide receiver Emmanuel Sanders, who returned to the practice field Friday and is probable to play against the Dolphins.

Sanders was forced out of the St. Louis game in the third quarter after sustaining a concussion on a vicious hit from Rams safety Rodney McLeod. The offseason acquisition was cleared by a neurologist on Thursday night, however.

Prior to departing last week's tilt, Sanders recorded five catches for 102 yards and a touchdown for his third 100-yard effort in Denver's past four games.

The Broncos will definitely be without running backs Ronnie Hillman and Montee Ball for Sunday's matchup, with both players ruled out. Hillman will miss a second straight week with a sprained foot, while Ball aggravated a groin injury against the Rams. It was his first action since Week 5.

Backup tight end Virgil Green is considered questionable with a calf injury, but was a limited practice participant throughout the week.