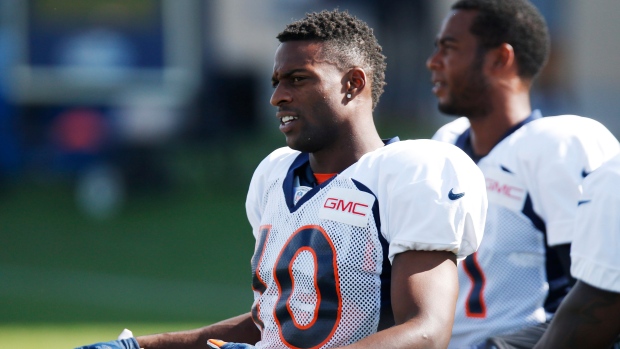 Last year, it was a strained thigh that sidelined him for 1 1/2 weels. This time, it's a pulled right hamstring.

Thomas also skipped Peyton Manning's annual passing camp at Duke. So, Manning hasn't had his pair of Pro Bowl receivers on the field together with him for any meaningful snaps since the playoffs.

Sanders isn't expected to play in either of Denver's remaining exhibition games although coach Gary Kubiak said he hopes to have him back on the field next week.

"He ran yesterday and everything was positive, there were no setbacks," Kubiak said Thursday. "I'm hoping tomorrow he gets some throwing in with Peyton after our jog-through or whatever we end up doing in the morning. I think everything's on schedule for him to be a full-time participant next week."

Manning is portraying an air of patience over the situation.

Last year, Manning texted Sanders one night telling him he'd better get back in the lineup so they could work on their timing. A few days later, Manning and Sanders hooked up for two long touchdown passes in a preseason game.

He got plenty of work in the new offence with Manning this off-season but he said when training camp opened that he still needed more time with his quarterback to get comfortable.

"Last year, one of my main goals was to earn Peyton's trust," Sanders said last month. "I came here working my butt off for Peyton to the point that I almost tore my quad and I had to sit out a week-and-a-half of training camp. But I still have that same mindset. I'm blessed and fortunate enough to play with a Hall of Fame quarterback, and I'm still coming in here trying to earn his trust."

About a week later, he was sidelined.

"It's still preseason," Sanders said recently. "I'm not saying that it's not important because it's definitely important for me. I want to be out there. I want to be able to make plays so when I enter the regular season I'm ready. Still, I don't want to go out there and be playing hurt."