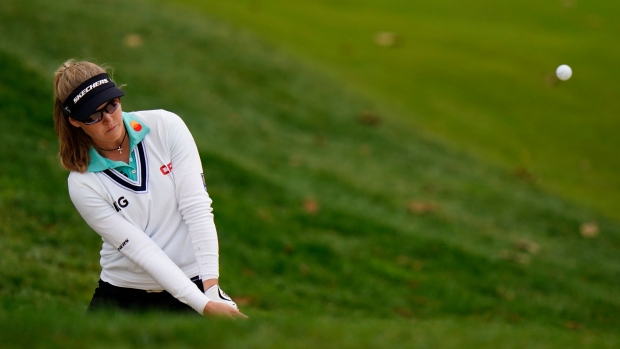 It wasn’t hard enough to be called a slam. It was more of a slap.

However you want to classify it, what Brooke Henderson did with her driver as it met the turf after a poor tee shot on the 12th hole was fueled by understandable exasperation. No one would blame her for the uncharacteristic reaction.

A day after a bogey-free third round in the KPMG Women’s PGA Championship put her in contention for a second major title, the 23-year-old struggled to find any rhythm with her game, posting a two-over 72. A few errant tee shots, some mediocre approaches, too many extra-long birdie attempts topped with some bad luck were in stark contrast to a day earlier when everything seemed to go her way.

Henderson’s body language on a cool, breezy day spelled out the frustration as she slumped and drooped after too many swings and her normally cheery smile was rarely seen. Clearly this wasn’t going to be her day. Still, she did end up with a respectable sixth-place finish.

Her Sunday troubles started on the par-3 fifth hole when her tee shot landed in a bad lie in a greenside bunker and she failed to get it up and down.

Two holes later, her drive found a nasty lie in the rough and her approach shot squirted off into an awkward lie to the right of the green leading to another bogey.

On 12, scene of the aforementioned driver spank, the tee shot landed in a fairway bunker with a prodigious lip that prohibited her from reaching the putting surface. The result was a third bogey, which caused her to all but lose touch with the top of the leaderboard.

Her only birdie of the day came after a pin-seeking tee shot on the par-three 14th finished four feet from the cup.

Despite the final tally, Henderson finished inside the top six for the fifth time in the last six editions of the KPMG Women’s PGA. It also gave her $147,862 in prize money, enough to pass Lorie Kane on the LPGA Tour’s career money list as the top Canadian.

Even if she had been at her best, Henderson would have had a hard time catching eventual winner Sei Young Kim. The 27-year-old South Korean golfer, who started the day with a two-shot lead, made seven birdies, including four on her last six holes, en route to a sizzling 63 that resulted in her 11th LPGA title and first major. The round was the lowest of the week by any competitor over the exceptionally difficult Aronimink Golf Course.

"I stuck to my game plan," said Kim, who revealed she didn’t look at the scoreboards all day. "Just focused one shot at a time. I didn't want to play like this was my final round but just stick to my momentum that I've played all week, so that worked out."

Only eight players finished under par for the week and Kim’s score of 14-under 266 set the tournament scoring record.

The score Kim posted more than impressed Inbee Park, who finished second despite a final-round 65.

Alena Sharp of Hamilton, Ont., finished tied for 48th after a final-round 72.