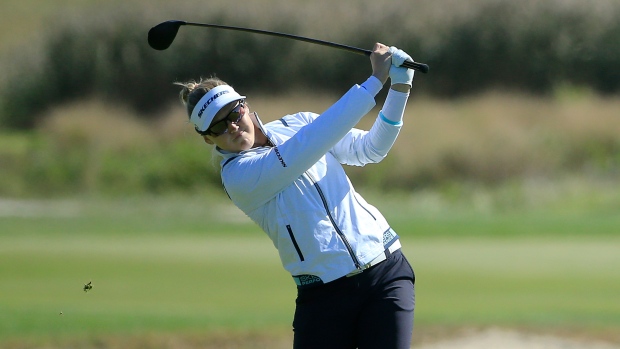 Saturdays are made for 65s.

At least, they are if you’re Brooke Henderson. For the third consecutive tournament and the second straight major, a 65 in the third round has propelled the 23-year-old up the leaderboard, this time at the KPMG Women’s PGA Championship. She will head into Sunday tied for second, two shots off the lead with a tremendous chance to win her 10th LPGA Tour title and second major.

On a challenging Aronimink Golf Course, Henderson made five birdies in a bogey-free round that equalled the low score of the week.

"I'm really happy with how today went," stated Henderson, who fired Saturday rounds of 65 at last week’s ShopRite Classic and the last major, the ANA Championship, in September. "Was able to make some birdies early, and that was a really nice feeling making the turn at four-under, and nice to climb up the leaderboard as much as I did, and I'm excited for the opportunity tomorrow."

After a silky par save on the first hole, the Smiths Falls, Ont.-product dropped birdies at two and four. On the sixth, her approach shot stopped four inches from the cup giving her a tap-in third birdie.

She hit two big shots on the par-5 ninth to reach the green and two putts later added her fourth birdie of the day to make the turn in 31.

Henderson used the slope of the 12th green on her approach shot to feed the ball to about 10 feet and recorded her fifth birdie of the round on a slippery downhill putt that went in the side door.

"I think the greens are probably the biggest challenge," Henderson stated, "just trying to hit smart shots into them, and then even though you're in the middle of the green it's not an easy two-putt. You've really got to think your way around this course."

As each round has progressed, the Canadian star has looked more and more comfortable around the beast of a course that has been stingy in giving up birdies. Only 10 players are under par after 54 holes.

Kim is a 10-time winner on the LPGA Tour including three last season. The 27-year-old has also won five times in her native South Korea.

Nordqvist has two majors to her credit along with six other titles.

It’s not the ideal spot for Henderson, based on her past record of wins. In seven of her nine victories, she’s been in the lead or co-led after 54 holes. The farthest back she’s been was in fourth spot and that came in her win at this tournament in 2016. Still, she’s more than happy at her position.

"Anytime you're in the hunt at a major championship, it's an amazing feeling," stated Henderson. "It was disappointing a couple weeks ago at ANA so hopefully I can be close to the top of the leaderboard going into tomorrow. There's still a lot of golf to be played, but hopefully close to the top and give it a good run."

A win on Sunday would make her the first Canadian golfer to capture two majors. That may be hard for her to grasp, seeing as how she is still amazed at her first one at this tournament four years ago.

"It definitely changed my life," admitted Henderson. "Eighteen years old and it was only my second win on Tour, so it was really a huge highlight for me and still is. Just sometimes it's hard to believe that I'm a major champion, but definitely in times like this it gives me a little bit of confidence, and I'm excited to try to do it again tomorrow."